Patient readers, as Yves approaches escape velocity from New York this week, I will be taking on more posting duties, and so Water Cooler may appear at odd times, and, as today, will shortly become less abbreviated. With a big post on the debates just up, politics is covered, so I’ll only be covering business, the biosphere, and other random topics. –lambert

I will also be Live Blogging the Democrat Presidential Debates. The debate starts at 9:00PM, and the pre-game festivities will begin at 8:30PM (when this link goes live).

And I will also be posting a Water Cooler special on an amazing gaffe by Elizabeth Warren, so stay tuned.

“Protective Wind Shear Barrier Against Hurricanes on Southeast U.S. Coast Likely to Weaken in Coming Decades” [Weather Underground]. “When low wind shear occurs in summer or fall in the Atlantic’s main development region (MDR), from the coast of Africa through the Caribbean, an active period for major hurricane activity often results. But the major hurricanes that form in the MDR during these situations often have trouble maintaining their intensity when they reach the Southeast U.S. coast, since low wind shear in the MDR is typically accompanied by high wind shear along the Southeast U.S. coast. This high shear, typically associated with strong upper-level winds from the mid-latitude jet stream, helps protect the U.S. East Coast against strikes by full-strength major hurricanes. But research published last month led by Mingfang Ting of Colombia University, Past and Future Hurricane Intensity Change along the U.S. East Coast, found that the Southeast U.S. protective barrier of high wind shear is likely to weaken in coming decades due to global warming. Using multiple climate computer models, the researchers found that global warming is likely to cause wind shear along the Southeast U.S. coast to decline significantly, mostly due to the northward migration of the mid-latitude jet stream that would accompany the expansion of the tropics (in meteorological lingo, we call this the expansion of the Hadley Cell).” • I guess I had better cut down those trees in the back of the house after all..

“Algae Blooms Fed by Farm Flooding Add to Midwest’s Climate Woes” [Inside Climate News]. “Scientists project that all that water has flushed vast amounts of fertilizer and manure into waterways, triggering a potentially unprecedented season of algae blooms. The National Oceanic and Atmospheric Administration has predicted that the ‘dead zone’ in the Gulf of Mexico—a massive overgrowth of algae—could become the size of Massachusetts this summer, coming close to a record set in 2017, and that an algae bloom in Lake Erie could also reach a record size. ‘Every place in the Midwest is wet,’ said John Downing, an aquatic ecologist and director of the Minnesota Sea Grant. “There will be a terrific amount of algae blooms.’”

“Historic Midwest flooding to increase Gulf of Mexico ‘dead zone’ to size of Massachusetts” [Independent]. “A dead zone, or hypoxic zone, is an area in water where oxygen concentration is so low that animal life suffocates and dies. The Gulf of Mexico hosts a consistently large one; in 2017, it reached its largest recorded mass at 8,776 square miles, or roughly the size of New Jersey. This year’s zone is predicted to take up approximately 7,829 square miles, which is about the size of Massachusetts. This year’s large zone is caused by nutrient pollution, the result of intense flooding in the American Midwest, where the Mississippi River’s watershed saw abnormally high amounts of flooding that created record high river flows. The nutrient discharge, in the form of fertiliser and manure, washed into streams, rivers and lakes, stoking the growth of algae, which depletes oxygen in the water, killing aquatic life and making water unsafe to swim in or drink.” • Thanks, Big Ag!

“Japan’s anime industry in crisis despite its popularity” [Japan Times]. “But just as Japanese anime seemed to be threatening to loosen Pixar and Disney’s grip on the popular imagination with the likes of the teen mega hit ‘Your Name.’ and a Nintendo Super Mario movie in the pipeline, long-running structural problems are in danger of sapping its rise… Ayumu Watanabe — whose beautiful ‘Children of the Sea’ was shown out of competition at the festival — also worries about visual “standardization” and lack of originality, which he says is not helped by the fact that “fewer and fewer animators can draw well by hand.”” • Software…

“The UFC will tarnish its name forever if it goes ahead with the Justin Bieber vs. Tom Cruise farce” [Business Insider]. • Wait. Did I read that headline correctly? Any part of it?

“Daily briefing: Athletes’ guts host a performance-enhancing microbe” [Nature]. “The guts of elite marathon runners contain a particular bacterium that eats lactate and makes mice run longer. Lactate is the by-product of strenuous exercise — it’s what makes you ‘feel the burn’. The bacterium, Veillonella atypica, metabolizes lactate into propionate, which seems to have exercise- and recovery-enhancing effects.” •. A mouse study….

Readers, feel free to contact me at lambert [UNDERSCORE] strether [DOT] corrente [AT] yahoo [DOT] com, with (a) links, and even better (b) sources I should curate regularly, (c) how to send me a check if you are allergic to PayPal, and (d) to find out how to send me images of plants. Vegetables are fine! Fungi are deemed to be honorary plants! If you want your handle to appear as a credit, please place it at the start of your mail in parentheses: (thus). Otherwise, I will anonymize by using your initials. See the previous Water Cooler (with plant) here. Today’s plant (KS): 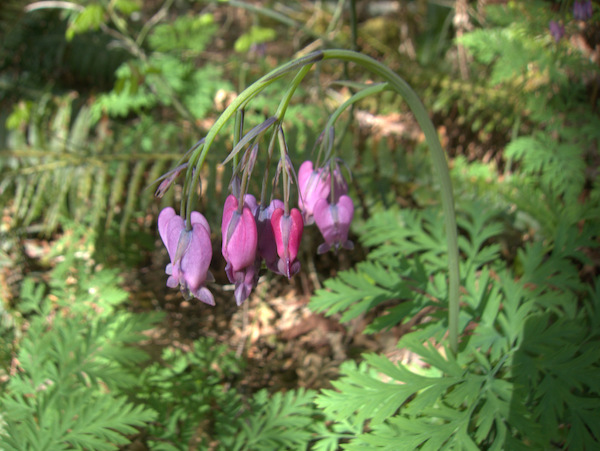 KS writes from the NW temperate rain forest. Bleeding hearts are one of my favorite flowers (but I’m weeding out all those frondy things in the background).