Latest News
Home /A Way Out from Rock Bottom: Economic Policies Can Reduce Deaths of Despair

Policymakers and researchers have sought to understand the causes of and effective policy responses to recent increases in mortality due to alcohol, drugs, and suicide in the US. This column examines the role of the minimum wage and the earned income tax credit – the two most important policy levers for raising incomes for low-wage workers – as tools to combat these trends. It finds that both policies significantly reduce non-drug suicides among adults without a college degree, and that the effect is stronger among women. The findings point to the role of economic policies as important determinants of health.

Since 2014, overall life expectancy in the US has fallen for three years in a row, reversing a century-long trend of steadily declining mortality rates. This decrease in life expectancy reflects a dramatic increase in deaths from so-called ‘deaths of despair’ – alcohol, drugs, and suicide – among Americans without a college degree (Case and Deaton 2015, 2017). Between 1999 and 2017, the age-adjusted rate of drug overdose deaths increased by 256%, while suicides grew by 33% (Hedegaard et al. 2017, 2018).

In their pioneering work first highlighting these trends, Case and Deaton point to declining economic opportunity among working class non-Hispanic whites – combined with an increase in chronic pain, social distress, and the deterioration of institutions such as marriage and childbearing – as primary drivers of these trends. Case (2019) further notes that inflows of cheap heroin and fentanyl interacted with ongoing poor economic conditions among less-educated workers to perpetuate mortality due to these causes. Other scholars have questioned the explanatory focus on distress and despair, especially for drug-related deaths (Roux 2017, Ruhm 2019, Finkelstein et al. 2016). These researchers point instead to place-specific and ‘supply-side’ factors of the drug environment, particularly the role of new, highly addictive and risky drugs. Others have also pointed to the role of the obesity epidemic and the lagged effects of the HIV/AIDS crisis as drivers of these trends (Masters et al. 2018).

We contribute to this discussion by examining how two economic policies that increase after-tax incomes of low-income Americans – the minimum wage and the earned income tax credit (EITC) – causally affect deaths of despair.

To estimate the causal effects of minimum wages and the EITC on mortality, we adopt a quasi-experimental approach, leveraging state-level variation in state economic policies over a 16-year period from 1999-2015. Our primary data source consists of geocoded CDC Multiple Causes of Death files linked with state-level demographic, economic, and policy variables from a variety of sources (see Dow et al. 2019 for a full description of data sources and methods).

The restricted-access mortality files we use contain various demographic characteristics including race, ethnicity, age, gender, and education. Education is of particular relevance to our analysis as it serves as a proxy for exposure to the EITC and the minimum wage. We focus specifically on mortality among adults aged 18-64 without a college degree, as this is the population most likely to be affected by minimum wage changes and the EITC. While the term ‘deaths of despair’ typically includes deaths from drug overdoses, suicides, and alcohol-related illness (Case and Deaton 2015), we focus here on drug overdose deaths and non-drug suicides, which are more likely to be responsive to recent policy changes in the short-run.

Our analysis follows the standard difference-in-differences approach to estimate models of cause-specific mortality over time. Our estimates suggest that both policies significantly reduce non-drug suicides among our lower-educated sample (adults without a college degree). Specifically, we highlight three findings. First, a 10% increase in the minimum wage reduces suicide deaths by 3.6%, while a 10% higher maximum EITC reduces suicides by 5.5%. Based on the average annual suicide rate in this population over the study period, this translates to a reduction in over 1,200 suicides annually.

Second, the effect of these policies on reducing suicide is stronger among women. A 10% increase in minimum wages (state EITC credits) leads to a 4.6% (7.4%) reduction in suicide deaths. This is consistent with differences in exposure to these policies, as women are more likely to work minimum wage jobs and to be eligible for the EITC.

Third, we do not find any differential effects of minimum wages on suicide for white non-Hispanic and other racial/ethnic groups, yet there is suggestive evidence that the EITC may have larger effects among people of colour.

Overall, we find that the reduction in suicides is greater among the groups that are more likely to be affected by higher minimum wages and generous EITCs. We find no significant effects of these two policies among adults with a bachelor’s degree or higher – a population less likely to work minimum wage jobs or to be eligible for the EITC. This finding lends support to our hypothesised mechanism that these policies reduce suicides by lifting low-income groups out of poverty. Importantly, neither policy significantly affected drug-related deaths, which have increased in the US with the greater availability of illegal opioids, heroin, and fentanyl. These null effects are consistent with the arguments made by Ruhm (2019), Finkelstein (2016), and others highlighting the supply-side drivers of the dramatic increase in drug overdose fatalities. It is likely that other policies are needed to combat these trends.

Our study provides the first causal evidence of the beneficial effects of these policies on fatalities attributable to non-drug suicide. Underlying our study design is the fundamental assumption that we can obtain causal estimates of policy effects by comparing states that have different minimum wages and EITC rates within the same year. For this approach to be valid, the parallel trends assumption must hold – that is, changes in state minimum wages and EITC rates should be uncorrelated with unobserved drivers of mortality.

We provide strong evidence of the parallel trends assumption by estimating an event study model that captures the time path of effects around the time of minimum wage or EITC change. The intuition behind these models is that higher minimum wages or EITC rates should not have any effects on mortality in the years leading up to the policy changes, but we should observe a discontinuous shift in the outcome at the time of implementation. This pattern is shown in Figure 1 plotting the estimated effects (and their 95% confidence intervals) for the minimum wage (panel A) and EITC (panel B), each stratified by gender. 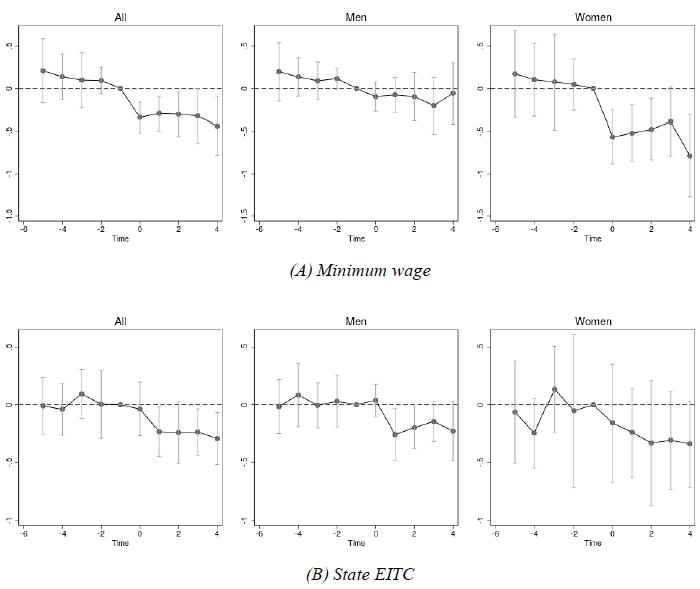 More generally, these findings further an emerging body of literature examining the relationship between economic policies and related health behaviours and outcomes. For example, recent research has found that minimum wage increases lead to reduced self-reported depression among women (Horn et al. 2017), reductions in suicide (Gertner et al. 2019), and do not have harmful effects on teen alcoholism or drunk driving fatalities (Sabia et al. 2019). In general, a majority of the recent papers on the effects of minimum wages on health have identified beneficial effects, though many of these studies use questionable methods that cast doubt on their validity as credible causal analyses (Leigh and Du 2018, Leigh et al. 2019).

Expansions of the EITC have been found to significantly improve the health of mothers and birth outcomes (Evans and Garthwaite 2014, Hoynes et al. 2015, Markowitz et al. 2017), and a recent study by Lenhart (2019) finds that EITC expansions improve self-reported health. Taken together, these findings point to a substantial public health benefit of increasing the minimum wage and expanding the EITC.

The minimum wage and the EITC each raise incomes for low-wage workers. Economists have generally found that minimum wage policies increase income and reduce poverty, while having very little to no negative effects on employment. The new findings in this study suggest that the benefits of minimum wage and EITC policies are broader than previously thought and can help combat the high and increasing levels of deaths of despair.