Although the negative impact of conspicuous consumption has been discussed for more than a century, the link between advertising and individual is not well understood. This column uses longitudinal data for 27 countries in Europe linking change in life satisfaction to variation in advertising spend. The results show a large negative correlation that cannot be attributed to the business cycle or individual characteristics.

Advertising is ubiquitous. In recent decades, the volume of advertising has been growing dramatically. Therefore, it is natural to ask if this harms our wellbeing.

We do not perfectly understand the link between advertising and individual wellbeing. It is reasonable to assume that it might operate through two broad channels that have opposing effects:

At the national level, we do not know which of the two effects is dominant. Many national variables influence wellbeing, in particular the generosity of the welfare state and variables such as unemployment (DiTella et al. 2001, DiTella et al. 2003, and Radcliff 2013). But recent research on subjective wellbeing, described in sources such as Easterlin (2003), Oswald (1997), Layard (2005) and Clark (2018), has paid little attention to the role of advertising, and so there are no cross-country econometric studies of the effect of advertising using representative samples of adults.

Keeping up with the Joneses

In this context, is a reasonable hypothesis that advertising has a negative effect on wellbeing. Easterlin (1974) found early evidence suggesting that society does not become happier as it grows richer. He suggested that one mechanism might be that individuals compare themselves with their neighbours. Easterlin’s thesis, in part, assumes that we desire conspicuous consumption (Veblen 1899, 1904).

If individuals have ‘relativistic’ preferences, so that they look at others before deciding how satisfied they feel, then when they consume more goods, they fail to become happier because they see others also consuming more. The pleasure of my new car is taken away if Ms Jones, in the parking spot next to mine, has also just bought one. More recent evidence on ‘comparison effects’ has been reviewed by Clark (2018). Mujcic and Oswald (2018) also find longitudinal evidence of negative wellbeing consequences based on envy.

Since Veblen, many researchers have worried about negative effects on wellbeing of advertising. In some cases they have found small-scale evidence (examples include Richins 1995, Easterlin and Crimmins 1991, Bagwell and Bernheim 1996, Sirgy et al. 1998, Dittmar et al. 2014, Frey et al. 2007, and Harris et al. 2009). Research has focused on the likely detrimental effects upon children (Andreyeva et al. 2011, Borzekowski and Robinson 2001, Buijzen and Valkenburg 2003a, Opree et al. 2013, and Buijzen and Valkenburg 2003b), although the most recent work, by Opree et al. (2016), produced inconclusive results.

Evidence of a negative effect

We have found evidence of negative links between national advertising and national wellbeing (Michel et al. 2019). Using longitudinal information on countries, from pooled cross-sectional surveys, we find that rises and falls in advertising are followed, a few years later, by falls and rises in national life-satisfaction, giving an inverse connection between advertising levels and the later wellbeing levels of nations.

We took a sample of slightly over 900,000 randomly sampled European citizens in 27 countries, surveyed annually from 1980 to 2011. Respondents reported their level of life satisfaction and many other aspects of themselves and their lives. We also recorded total advertising expenditure levels.

Figure 1 The inverse longitudinal relationship between changes in advertising and changes in the life satisfaction of countries, 1980 to 2011 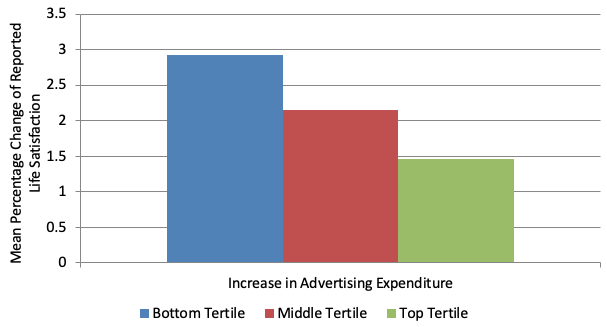 Advertising does not have a spurious association with life satisfaction that is attributable merely to the business cycle. Using standard regression analysis, we were able to show that the negative effect of advertisement on life satisfaction is not due to the correlation of both variables with the GDP. This negative effect is robust to the inclusion of other variables like country and year fixed effects, unemployment, and individual socioeconomic characteristics that are typically included in any happiness equation.

These results are consistent with concerns that were first more than a century ago, and regularly since (Veblen 1904 and Robinson 1933, for example). They are consistent with Easterlin (1974, 2003) and Layard (1980). They may also be consistent with ideas about the negative consequences of materialism (Sirgy et al. 2012, Burroughs and Rindfleisch 2002, Speck and Roy 2008, and Snyder and Debono 1985).

Although there is evidence of an inverse longitudinal relationship between national advertising and national dissatisfaction, we still need to uncover the causal mechanism. But this demands investigation, because the size of the estimated effect here is both substantial and statistically well-determined.