The price of traveling can quickly get out of hand. Add in multiple family members can really add up. Learn new ways to save on travel.
Buzz60

A British Airways flight from London to Germany accidentally took off in the wrong direction, landing 525 miles away in Scotland.

The flight from London City Airport was supposed to head to Duesseldorf, Germany, but ended up in Edinburgh, Scotland, instead – the total opposite direction.

The airline said Monday the problem started when an incorrect flight plan was filed by WDL Aviation, which operated the flight on behalf of British Airways.

Officials told the Associated Press that the pilot followed the flight plan for Edinburgh, and that air traffic control officials also were following the same flight plan and saw nothing amiss.

“We are working with WDL Aviation, who operated this flight on behalf of British Airways, to establish why the incorrect flight plan was filed,” British Airways spokesperson Chip Garner said in a statement to USA TODAY. “We have apologized to customers for this interruption to their journey and will deal with them all individually. Customers are on route to Dusseldorf currently.”

“We are working closely with the authorities to investigate how the obviously unfortunate mix-up of flight schedules could occur,” said WDL spokesperson Joachim Schöttes. At no time has the safety of passengers been compromised. We flew the passengers on the flight with number BA3271 to Dusseldorf after the involuntary stopover in Edinburgh.” 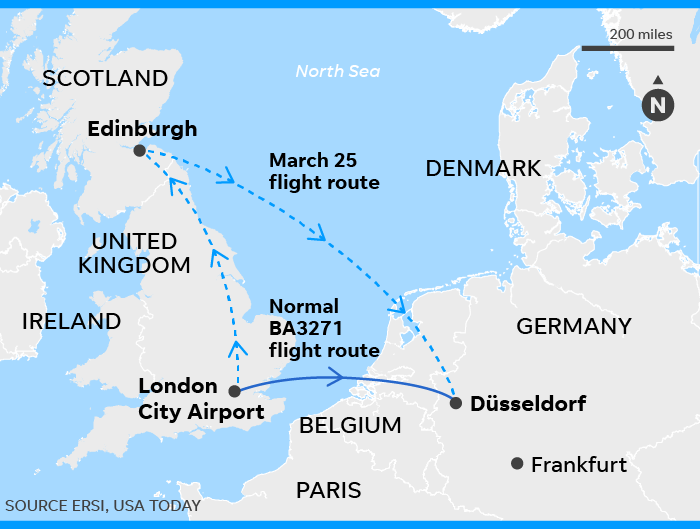 One passenger, Son Tran, tweeted about his experience on the flight.

“Can you please explain how can my morning flight taking off from LCY to Dusseldorf land in Edinburgh? While an interesting concept, I don’t think anyone on board has signed up for this mystery travel lottery,” Tran tweeted.

British Airways responded with a tweet, writing: “The flight has been diverted to Edinburgh, we don’t have any information as to why at the moment. There is an estimated departure time of 10:30 from Edinburgh to make way to Dusseldorf.”

“This feels like an honest mistake rather than a diversion,” Tran responded. “The crew was convinced of the Edinburgh flight path from the get-go.”

This feels like an honest mistake rather than a diversion. The crew was convinced of the Edinburgh flight path from the get-go… 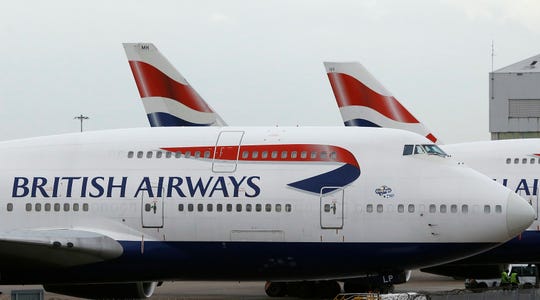 A British Airways flight from London to Germany accidentally took off in the wrong direction, landing 525 miles away in Scotland. (Photo: Frank Augstein, AP)