About half of the world’s coral reefs have disappeared since 1980.

These ecosystems may collapse entirely as early as 2050 – absent significant progress in mitigating climate change, independently protecting reefs, or a combination of both.

What’s killed the reefs? Coral reefs have been stressed in several ways: e.g.  habitat destruction – some caused by coastal development; overfishing – including destructive practices such as dynamite fishing; and pollution – including plastics (see my previous post,Plastics Sicken Coral Reefs).

More recently, climate change has posed the most acute threat to coral reefs. Increasing ocean temperatures have caused coral bleaching, when heat-stressed coral polyps expel their symbiotic algae and turn white. Corals can recover from a mild bleaching event. But the stress from bleaching, makes them vulnerable to disease, and amplifies their risk of dying (see this National Oceanic and Atmospheric Administration summary,What is coral bleaching?).

Several of the world’s major reef systems have suffered major bleaching events between 2014 and 2017 – and did not recover. In fact, the Great Barrier Reef lost at least half its corals to bleaching in 2016 and 2017 (see my previous post, Cumulative Stress Impairs Great Barrier Reef Recovery). And a further problem is that the dissolution of more carbon dioxide in the oceans lowers the pH of seawater, making it more difficult for corals to grow or maintain their skeletons via calcification. 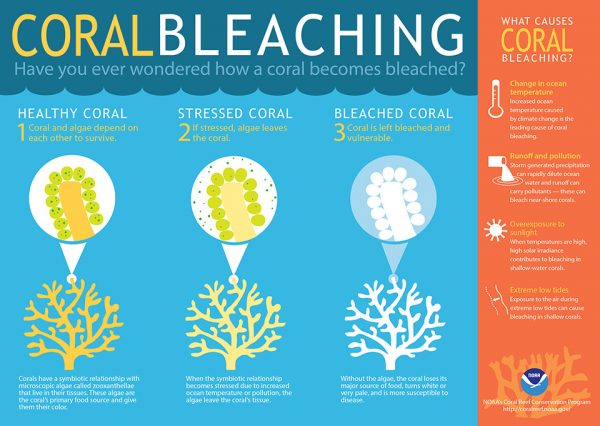 What Can Be Done?

Last Wednesday, a 12-member committee of the National Academies of Sciences, Engineering, and Medicine, issued a comprehensive report, A Decision Framework for Interventions to Increase the Persistence and Resilience of Coral Reefs, which assessed possible interventions to increase the resilience of coals reefs. As Grist reports in Scientists create a new guide for saving corals in a warming world:

Solving the climate crisis is “the only way the corals are going to be able to thrive into the far future,” Stephen Palumbi, the committee’s chair and a marine biology professor at Stanford University, said at a public briefing Wednesday in Washington, D.C.

The  committee of scientists first convened in February 2018 and produced an interim report in November that same year, which hinted at 23 strategies that might help save coral reefs – independent of any progress on slowing climate change.

The report is detailed and comprehensive, and I’ll admit trying to understand – let alone assess – the strategies outlined is very heavy going for those without a marine biology background.  As Science Daily reports in Protecting coral reefs in a deteriorating environment:

“Maintaining the stability of coral reefs in the face of local and climate stressors is a key goal for supporting human well-being around the world,” said [Palumbi]. “Many new interventions have promise for these efforts, but they differ widely in their readiness levels, and implementing them will require careful attention to regional contexts.”

Some  strategies discussed seem minimalist, while other mooted interventions are quite radical. Many are still at a preliminary stage, and may not prove to be feasible (or especially effective). As Science Daily summarizes:

Many of the new interventions seek to amplify natural resilience, such as laboratory breeding of corals that show greater heat resistance. Other methods, some merely on the horizon such as genetic manipulation of corals, might one day introduce new levels of stress tolerance. Ultimately, all interventions alter the reef in some way. These changes will result in benefits that differ across sites, and they may have varying unintended consequences — meaning that the risks and benefits need to be weighed locally, the report says.

The committee’s new, final report includes an assessment of the technical readiness of various interventions. Some are possible to use now — for example, pre-exposing corals to mild warming in order to improve their tolerance of greater heat levels. With more research and testing, others may be available for use in the next two to five years, such as using antibiotics to treat disease, mixing cool water into reef habitats, or shading corals from sunlight and heat. Still other proposed interventions — for example, using tools such as CRISPR/Cas9 to genetically manipulate corals to make them more threat-resistant — need significantly more research and development, and are at least a decade away.

“Though all of these interventions entail some risk, the risk from doing nothing is increasing year by year,” said committee member Nancy Knowlton, former holder of the Sant Chair in Marine Science at the Smithsonian Institution.

The report provides a blueprint for various parties that seek to take action to assess the respective risks and benefits of implementing any combination of the interventions it assessed. The committee emphasised that there is no one size fits all approach for rescuing coral reefs: there is no magic bullet.  Instead, as Grist reports:

The amount of degradation, water quality and a reef’s location to other coral sites are among the many factors that should be considered when determining if the tools are suitable for use, the committee concluded.

The report also recommends that coral reef managers follow an “adaptive management” approach in making decisions about interventions — an approach that recognizes uncertainty and incorporates learning to adjust and improve strategies over time. “The science of coral reef interventions is still young, and particular environments may respond to them in different ways. So using a structured and adaptive decision-making approach allows managers to make decisions even when there is uncertainty,” said Palumbi.

Whereas the committee focussed on interventions that might be undertaken to increase the resilience of coral reefs, another approach to addressing this problem is to study reef systems that haven’t yet been affected much by bleaching, such as the reefs in Manado (northern Sulawesi). A June 2018 survey of these reefs by Microsoft co-founder Paul Allen’s family foundation concluded they were “surprisingly healthy”, according to this Guardian account, AI identifies heat-resistant coral reefs in Indonesia:

In fact the  reefs hadn’t appeared to decline significantly in condition than when they were originally surveyed in 2014 – a surprise for British scientist Dr Emma Kennedy, who led the research team.

“After several depressing years as a coral reef scientist, witnessing the worst-ever global coral bleaching event, it is unbelievably encouraging to experience reefs such as these,” she said. “It means we still have time to save some coral reefs through the science-based targeting of conservation action.”

Indonesia is situated in the heart of the Coral Triangle – home to the greatest levels of marine biodiversity on the planet. There are reefs here that contain more species than the entire Caribbean, which is why the bioregion is of particular interest to scientists looking into reef resilience.

The Sulawesi research is part of the 50 Reefs Initiative , which set “the ambitious goal of identifying a global portfolio of coral reefs with a good chance of both surviving the impacts of climate change and being able to help repopulate neighboring reefs.”

As the Guardian notes:

The hope is that if key reefs can be protected from other stressors such as plastic pollution and overfishing, they can ride out the worst impacts of climate change and replenish adversely affected reefs once ocean temperatures stabilise.

The findings of the Sulawesi survey will help scientists and conservationists target coral conservation programmes elsewhere in the world. With perhaps three decades left to rescue a vital global ecosystem from extinction, it is progress that’s sorely needed.

I remember well my first sight of a coral reef, while snorkelling. So wondrous was it that it inspired me to learn to scuba dive – even though I’ve always been more than a bit afraid of water.

Permit me to close by quoting from a Guardian account I first cited in this earlier post, Protecting Coral Reefs: Sustainable Scuba Diving Practices:

David Obura, chair of the Coral Specialist Group in the International Union for the Conservation of Nature predicts, as reported by the Guardian in Next generation ‘may never see the glory of coral reefs’:

“Children born today may be the last generation to see coral reefs in all their glory. Today’s reefs have a history going back 25 million to 50 million years and have survived tectonic collisions, such as that of Africa into Europe, and India into Asia. Yet in five decades we have undermined the global climate so fundamentally that in the next generation we will lose the globally connected reef system that has survived tens of millions of years.”

Alas, I fear Obura is right – but I’m nonetheless glad to see scientists not surrendering to despair, and instead, attempting to protect these wonders.