Those of us who often write about various doomsday scenarios – e.g., plastics, climate change  – are well familiar with a standard magical thinking response: a miraculous change in the mindset of millennials will change the world, and save us all from impending disaster.

Alas, Deloitte published a report last week, debunking this scenario: The consumer is changing, but perhaps not how you think. Millennials, it seems, behave just like you and me: economic factors drive their behavior.

But I’m getting ahead of myself. Let’s discuss the Deloitte report, which begins  with a statement of the conventional wisdom:

The  consumer is changing. They are more capricious and less loyal. They have less time but are more conscientious. They shy away from stores and prefer experiences over products. Today’s consumer is an entirely different animal—and unrecognizable from their peer from the good old days. This brand of conventional wisdoms has been proliferating in the marketplace for a few years now. It appears as if there has been a seismic shift in the consumer’s mindset—and choices—a shift that has left the market asking: “Who is this brand-new consumer?”

There are even more clichés surrounding the millennial consumer. They are often branded as being more narcissistic, more idealistic, more socially-conscious, and more experience-oriented than any of their preceding generations. They have even been blamed for ruining everything from movies to marriage!1 They seem to have broken the mold of their similar-aged cohorts of past eras.

The bottom line: “Contrary to conventional wisdom, there’s been no fundamental rewiring of the consumer. The modern consumer is a construct of growing economic pressure and increasing competitive options.”

Our findings debunked many conventional wisdoms about the new-age consumer. What we learned is that the consumer hasn’t fundamentally changed, but to the extent they are changing is because the environment around them is evolving, characterized by economic constraints and new competitive options. They’re changing because of the financial constraints they find themselves in. This, in turn, has been triggered by a rise in nondiscretionary expenses such as health care and education and the growing bifurcation between income groups. They’re also changing in reaction to the abundance of competitive options available to them, made possible by technology.

It’s this swirl of financial and marketplace dynamics that is heavily influencing the behavior of today’s consumer as opposed to a fundamental rewiring.

In any discourse on the consumer, it would be remiss not to mention their changing economic situation. As we first highlighted in The great retail bifurcation, there is a deepening economic bifurcation between the top 20 percent income earners and the rest of the population—a divide that has a huge impact on consumer behavior.

Between 2007 and 2017, income growth for the high-income cohort (>US$100,000 in mean household income) rose 1,305 percent more than the lower-income group (<US$50,000 in mean household income) in the United States. This divide has been even more conspicuous because of the rise in nondiscretionary expenses across groups (figure 2). The bottom 40 percent of earners had less discretionary income in 2017 than they did 10 years ago, and the next 40 percent saw only a minor increase. Only 20 percent of consumers were meaningfully better off in 2017 than they were in 2007, with precious little income left to spend on discretionary retail [Jerri-Lynn here: citations omitted.[ 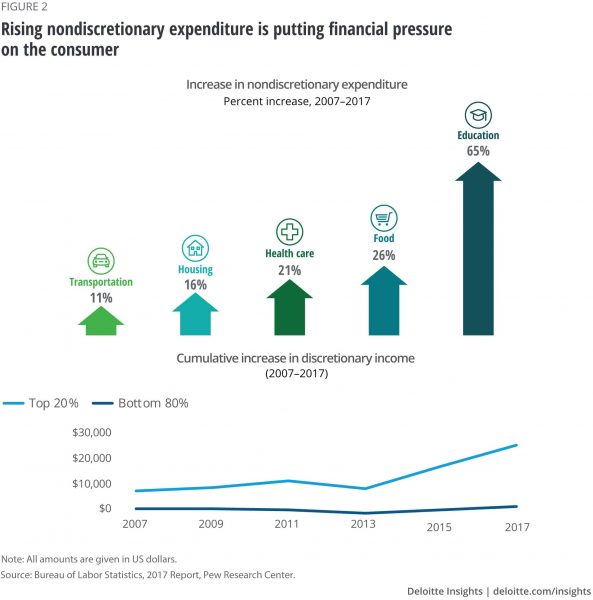 The Deloitte report makes clear that millennials are subject to the same economic pressures that burden everyone, including the shrinking middle class. To the extent the millennial cohort is unique, it is only so in that younger people are encumbered with high levels of student debt – look at that high level of education spending in the graphic.This is a problem, I should mention, that millennials have been bequeathed by Uncle Joe Biden. And I also draw your attention to growing health care expenditures, up more than 20% over the last decade. That problems Is  not unique to millennials, and encumbers all  Americans.

But back to the burdens faced by millennials, who are financially worse off than older Americans. As Deloitte reports:

Moreover, there’s a good reason why millennials are reaching these milestones later in life: they are significantly financially worse off than previous similar-aged cohorts. Since 1996, the net worth of consumers under the age of 35 has fallen by 34 percent.24 Homeownership for the cohort declined by more than 4 percent between 2007 and 2017 (figure 3). And the rise in the education level of millennials hasn’t come cheap: Between 2004 and 2017, student debt has increased for consumers under 30 by 160 percent. Typecasting the millennial as simply being “different” overlooks a much bigger factor—that of their economic constraints.

Companies often say they need to “win with the millennial.” But the data about the economic well-being of this cohort shows that the millennial may well be losing economically. [Jerri-Lynn here: my emphasis.] 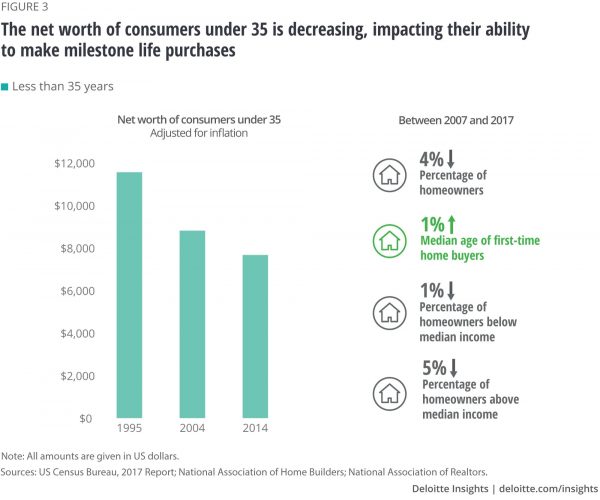 It’s not just the millennial cohort that’s losing – but everyone who’s not a member of the 1% (or perhaps, the 10%).

And, to expand on the current status quo – thus addressing  the issue raised in the headline to this post:

It’s important to note that the consumer can’t be viewed in isolation from the changing competitive market, driven by the explosion and access to choices. The consumer is changing in reaction to the proliferation of competitive options in the market. This change has been made possible by technology, coupled with reduced barriers to entry, and the emergence of smaller players who are creating niche markets with more targeted offerings.