Latest News
Home /“Convenience” for Whom?

Before sitting down at my desk in the garden, I caffeinate myself at the local convenience store, which is about a block away. Despite the cost, and the watery quality, this is more convenient for me than making the coffee myself, which is work: I have to grind the coffee, keep beans stocked, clean the cup and the potMR SUBLIMINAL Ha ha, you never clean the pot! and also wait for the drip process to complete. That’s a big ask for somebody who’s barely conscious. However, I think the real reason I go to the store is for a bit of physical human contact, even of the most fleeting and commercial kind, before I put my head down over the keyboard.

The convenience store is at an Irving gas station in a Circle K, and alert reader barrisj gave an excellent description of the Irving oil dynasty just the other day. Slightly modified:

[T]here is an intriguing article in the April edition of Le Monde Diplomatique (Maine coverage here) devoted to the Irving family of the Canadian province of New Brunswick, where the province is likened to a wholly owned subsidiary of the privately-held conglomerate. Oil, timber, and mining are amongst its huge holdings, and the Irvings have been making strong moves for some years now to “colonize” Maine as well. Rebuffed initially by the Maine legislature to “open up” Bald Mountain to copper and zinc mining, the Irvings are hard at it to gain permitting rights through extensive lobbying and cultivating “relationships” with willing politicos. The company has already received large concessions in timberland, and presently is the largest private landowner in the state.

If one isn’t a resident of Maine, it’s a “who knew?” story of how a foreign conglomerate can create a substantial economic and political footprint in a state eager to promote “jawbs-jawbs-jawbs” to boost local economies.

The Irvings are a deeply repugnant hive of destructive selfishness. Of course they decamped from Canada for tax purposes — would that they had taken their environmental rapine with them…

The Circle K that I enter is owned by Alimentation Couche-Tard, controlled by Alain Bouchard. So, having passed the gasoline pumps owned by a ginormous multinational controlled by one Canadian squillionaire family that has colonized Maine, I have entered a convenience store owned by second ginormous multinational controlled by a second Canadian squillionaire family that has colonized Maine. Of course, I could take an extra ten minutes — five minutes out, five minutes back — to a locally owned coffee shop, but that wouldn’t be… convenient.

So here is the future according to Canadian multinational squillionaires. (Sorry for the somewhat inferior quality of the shots; I can never hold the iPad Pro quite straight.) 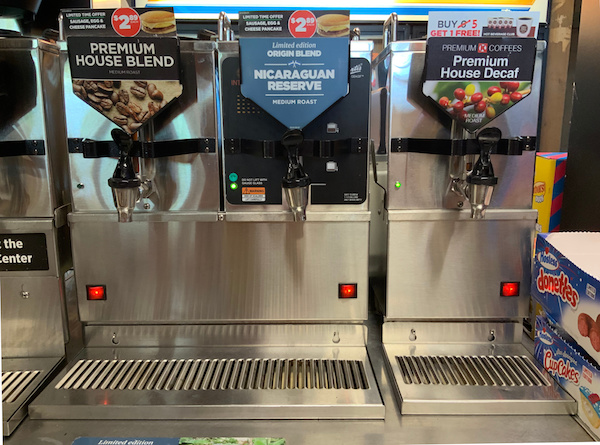 Globalization. “Nicaraguan Reserve.” I always get the globalized brand, not because it tastes any less watery than the other Circle K coffees (it doesn’t), but because I figure I might as well send some money, no matter how trivial the amount, down the supply chain to some Nicaraguan coffee farmer. What I don’t understand is Circle K’s reasoning. They are no slouches in the marketing and inventory control departments, so the Nicaraguan (or Costa Rican) must be selling, but why is that? Are they selling to the more aspirational Circle K customer? Or to Latinx customers? Or is it one of those deals where you have the high end product so people buy the mid-range instead? But the price of all coffees is the same. In any case, the beans made it all the way from Central America to the middle of Maine. We’re so convenient, we’re practically Davos! 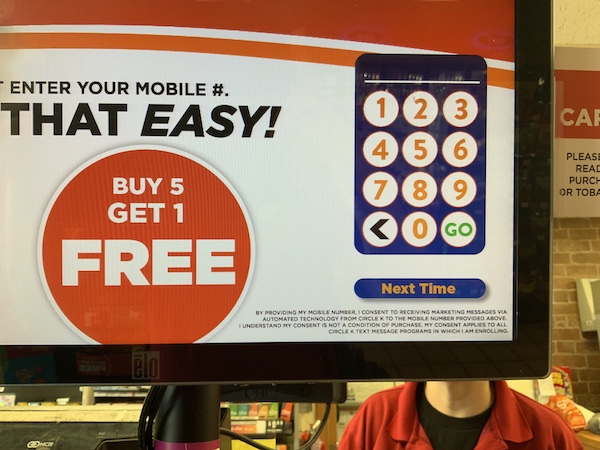 Loyalty. It used to be that I had a paper loyalty card that the cashier punched on every purchase (the sixth one is free!) Now the only loyalty cards are plastic ones that you scan after buying gas, and I don’t buy gas. But the cashier explained I could, as in the picture, punch in a (which doesn’t mean “my”) phone number instead. Which is far less convenient, being slower, than the punch card, and also makes me interact with a screen, not a human (you can see how the screen cuts off the cashier’s head). The up side (or down side, depending) is that the phone number is a primary key, but the system doesn’t check for uniqueness. So either I get a coffee before I have really “earned” it, or the other person (people?) with the same number I gave are getting the coffee I earned. And how convenient is that? 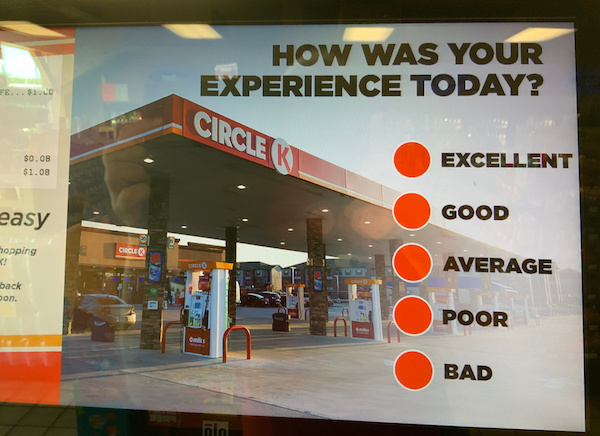 Loyalty. Finally, you can rate the transaction immediately after completing it, and you can bet the cashier’s ratings are cumulated and go right up to corporate. I really, really hate this, and I never, ever use it. Rating convenience store transactions on a five-point scale? Like, “the most excellent convenience transactions EVAH”? Really? I’m going to down-rate some poor schlub, and maybe make them lose their job — cascading downward to school, house, children, etc. — because I had to wait an extra three seconds because they fumbled cracking the plastic on a tube of coins? That would be BAD. It also slows down the transaction, already slowed by punching in my loyalty code, and further slowed, if I forgot to bring cash, by the new mills-of-God chip in my card. This sick optimization may be convenient for Alimentation Couche-Tard’s MBAs, but it isn’t convenient for me.

Anyhow, this is the future the squillionaires want: A globalized product line, every transaction trackable to an individual, and every employee subject to the most trivial whims of “I’ll call the manager!” [glass bowls]. Yay!

I don’t have much of a conclusion, except to note the creeping, dystopian crapification; all these changes took place in the last year. Readers, are there other less than convenient interactions that you are having with multinationals owned by squillionaire familes?