SportsPulse: We have our first real bracket buster of the tournament: UC Irvine. USA TODAY’s Scott Gleeson explains how they did it and if they’re a threat to make a legit cinderella run.
USA TODAY

March Madness is in full swing, with Thursday’s first-round action delivering on excitement but leaving our thirst for bracket-busting upsets not relatively quenched. Now we’re back for more, providing wall-to-wall college basketball for the entire day as the remaining teams start the first round.

Follow all of Friday’s NCAA tournament action here with in-game and post-game analysis on all 16 games, as well as the biggest news of the day. All times Eastern.

► No. 1 Duke vs. No. 16 North Dakota State (CBS): All eyes are on human highlight reel Zion Williamson as the top overall seeded Blue Devils show off their high-octane offense against this mid-major No. 16 seed from the Summit League. Duke started pretty slow, down 12-5 at one point and trailing at the first two TV timeouts. But Williamson’s monster dunk off an R.J. Barrett pass gave the Blue Devils their first lead of the game 18-16. It’s been back and forth since then as the Bison continue to surprise by staying in this one, trailing 26-25. Williamson has 10 points on 5-for-8 shooting. 2 minutes remaining.

FINAL — OREGON 72, WISCONSIN 54: The Ducks looked like the better team from the get-go and didn’t let up against the Badgers. They got a big lift from forward Kenny Wooten (9 points, four blocks), who had three monstrous dunks in the second half and a key block of star Ethan Happ that helped shake off any bit of momentum Wisconsin was trying to cook up. Payton Pritchard (19 points, eight assists, five rebounds, two steals) ran this team, which has found its identity at exactly the right time after a turbulent earlier half of the season. The loss was the first for the Big Ten, which had gone 6-0 before Wisconsin’s upset loss. 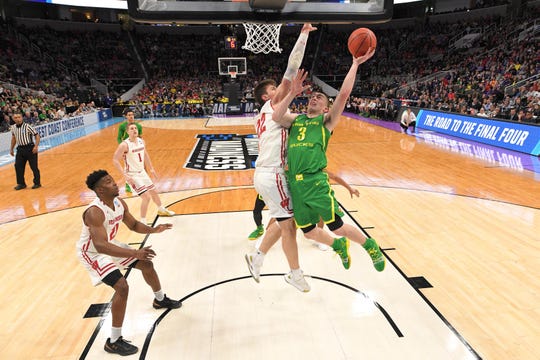 FINAL — BUFFALO 91, ARIZONA STATE 74: The Bulls are the real deal, and they used their first-round demolition of Arizona State to make that statement to the rest of the country that hadn’t seen them roll through the MAC. Jeremy Harris and Nick Perkins had 21 points apiece and Buffalo controlled the tempo throughout, as ASU managed just 3-for-22 from three-point range (14 percent).

BIG TEN: Conference 6-1 in the NCAAs

TAKEAWAYS: What we learned from Thursday’s NCAA tournament games

FINAL — TENNESSEE 77 COLGATE 70: Whew. That was a close one for Rick Barnes’ Final Four-contending team, as the Volunteers narrowly escaped a determined Colgate squad that was firing on all cylinders and was right there with minutes to go. Colgate’s Jordan Burns fueled his mid-major team’s fire with 32 points in the near-upset. 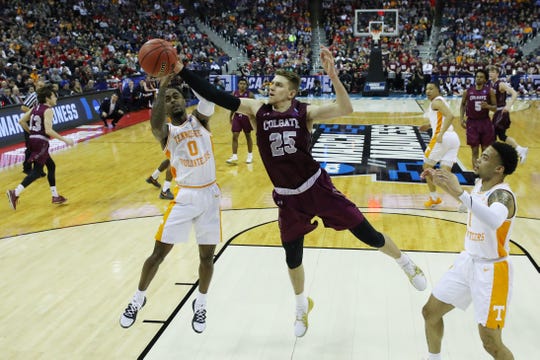 Jordan Bone of the Tennessee Volunteers battles for the ball with Rapolas Ivanauskas of the Colgate Raiders. (Photo: Elsa, Getty Images)

FINAL SCORE — VIRGINIA 71, GARDNER-WEBB 56: The Cavaliers gave themselves a scare, and had the nation gasping for a repeat of history after trailing by six in the first half. But ultimately the second half showed why this Virginia team is a far cry from the one that got stunned by UMBC last year. Give Gardner-Webb credit for coming out aggressive and looking like the more punchy team early. The Bulldogs certainly didn’t look the part of a No. 16 seed. UVA’s De’Andre Hunter (23 points) is the ultimate X-Factor for this team, and Mamadi Diakite used his size to quickly put this game away in the second half.

Gardner Webb players huddle during the first half against Virginia in the first round of the 2019 NCAA tournament. (Photo: Bob Donnan, USA TODAY Sports) 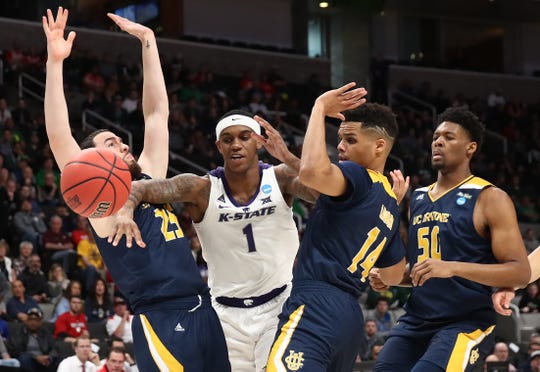 FINAL — IOWA 79, CINCINNATI 72: The Hawkeyes’ offense really came alive in the second half against one of the country’s toughest defenses, getting new life in this NCAA tournament after struggling in the latter part of the season before Friday’s clash with a Bearcats team that was heavily favored due to its seemingly homecourt edge playing in Columbus. Iowa’s inside-out game was the difference-maker, with big man Luka Garza (20 points, seven boards) and sharpshooter Joe Wieskamp (19 points on 4-for-6 three-point shooting). That win makes the Big Ten 6-0 in these NCAAs.

Iowa before the buzzer 👀🚨#MarchMadnesspic.twitter.com/YVa7qdjNuJ 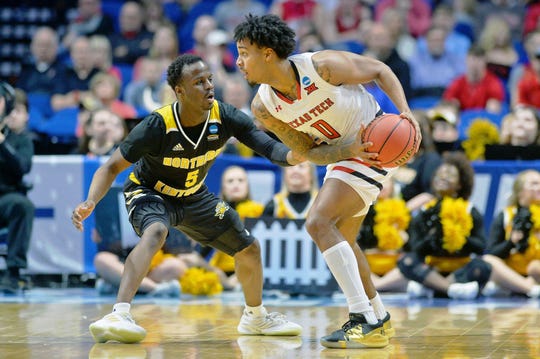 FINAL — OKLAHOMA 95, OLE MISS 72: This one wasn’t even close, as the Sooners came out as hot as any team in this tournament and didn’t take their foot off the gas. They only missed 10 shots in the first half and finished the game shooting 58 percent (34-for-59 from the floor). OU had four players score more than 18 points in this rout.