Yves here. Who’d have thunk it? Curbing rentier capitalism would be bad for rentiers. It’s only recently that more and more economic research and press interest about the cost of monopolies has taken the sheen off tech giants like Google and Amazon as it becomes increasingly obvious that their outsized results result from the abuse of market power, and not providing better services (if you think Google search circa 2019 can hold a candle to Google search circa 2009, I have a bridge I’d like to sell you).

The one area of significant bipartisan distrust is big tech monopolies. https://t.co/A3d9Qr9rmH

It’s a rare moment in recent years that US government regulators are suddenly going after four tech and social media giants simultaneously – Facebook, Amazon, Google, and Apple. These four companies are part of my FANGMAN index that also includes Microsoft, Nvidia, and Netflix.

The index dove 4.3% today, the biggest percentage decline since the infamous 4.6% drop on December 24, 2018. In terms of dollars, $137 billion in market capitalization was wiped out. Over the past four trading days the FANGMAN index has dropped by 6.6%. I highlighted today’s move in red (market cap data via YCharts): 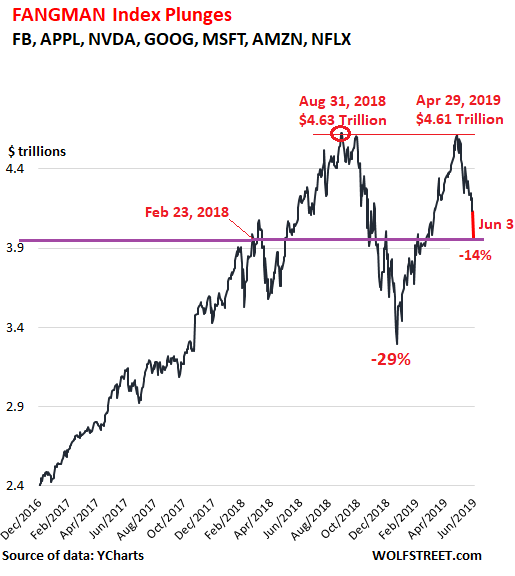 I track these stocks because of their outsized weight in the overall stock market, and because they range from very overvalued to immensely overvalued, depending on the stock – and symptomatic for much of the stock market.

But given the sell-off over the past few weeks, what happened since Friday in terms of regulatory pressure was quite a handful.

On Friday, the Wall Street Journal  reported that, according to its sources, the Justice Department “has been laying the groundwork” for an anti-trust investigation into Google, the largest advertising platform in the world. Reuters reported on Monday that Google still “declined comment.”

The WSJ summarized the problem:

The rise of big tech has seen three corporate titans that didn’t exist 30 years ago – Amazon, Google, and Facebook – suddenly amassing the power to sway large parts of the U.S. economy and society, from the stock market to political discourse, from personal shopping habits to how small businesses sell their wares.

With their enormous size and dominance have come network advantages, data caches and economies of scale that can make it challenging for new rivals to succeed. Many firms that compete with those giants in one sector also depend on their platforms to reach customers, and they complain of being unfairly squeezed.

Google has already been hit with three mega-fines by the European Union’s antitrust regulators, totaling €8.2 billion in three years:

Over the weekend, it was reported that the FTC would have jurisdiction over a potential antitrust probe into Amazon’s practices. And on Monday, Reuters reported that “Amazon declined comment on Monday.”

It was reported that, according to sources, the FTC would also have jurisdiction over a potential antitrust probe into Facebook, which also owns Instagram and WhatsApp.

The FTC has long been investigating Facebook for privacy violations. In 2012, it approved a final settlement with Facebook, “resolving charges that Facebook deceived consumers by telling them they could keep their information on Facebook private, and then repeatedly allowing it to be shared and made public.” This settlement included a consent decree that Facebook subsequently was alleged to have violated by sharing user data with Cambridge Analytica.

In April, Facebook said that it expected to be fined between $3 billion and $5 billion for these violations. Sen. Richard Blumenthal (D-Conn.) and Sen. Josh Hawley (R-Mo.), members of the Senate Judiciary Committee, lambasted it as a “bargain for Facebook” that doesn’t go nearly far enough in holding the company accountable to its users and forcing changes.

“Even a fine in the billions is imply a write-down for the company, and large penalties have done little to deter large tech firms,” they wrote in the letter. “Fines alone are insufficient. Far-reaching reforms must finally hold Facebook accountable to consumers. We’re deeply concerned that one-time penalties of any size every few years are woefully in adequate to effectively restrain Facebook.”

They proposed a slew of reforms, including that “personal responsibility must be recognized from the top of the corporate board down to the product development teams.” And they added, “It is also time for the FTC to learn from a history of broken and under-enforced consent orders.”

And it was reported over the weekend, again according to sources, that the Justice Department would have jurisdiction of a potential antitrust probe into Apple, which is already entangled in an investigation by EU regulators, following a complaint by Spotify that it abuses its power over app downloads.

That puts the four companies simultaneously under the US regulatory microscope. And clearly, officials have been fanning out to let the media know. On Monday, Reuters reported that “people briefed on the matter say neither the Justice Department nor the FTC have contacted Google or Amazon about any probes, and that company executives are unaware of what issues regulators are reviewing.” So they got their info from the media.

Divvying up jurisdiction was the first essential step. The rest might take years.

Sources told Reuters on Monday that the government “is gearing up to investigate whether Amazon, Apple, Facebook and Google misuse their massive market power … setting up what could be an unprecedented, wide-ranging probe of some of the world’s largest companies.”

Congress appears to be on board, according to Reuters:

Senate Judiciary Committee Chairman Lindsey Graham, a Republican, told Reuters that the business model of companies like Google and Facebook needs to be scrutinized. “It’s got so much power, and so unregulated,” he said.

Another Republican, Senator Marsha Blackburn, said the panel would do what she called a “deeper dive” into big tech companies.

Democratic Senator Richard Blumenthal, who said on Monday that U.S. enforcers have to do more than wring their hands about the companies’ clout, also weighed in. “Their predatory power grabs demand strict & stiff investigation & antitrust action,” the Connecticut senator wrote on Twitter.

So let’s see how that will turn out — if the outcome will effectively change business practices, or if any fines will just raise the cost of doing business, costs that can be written off as “one-time charges” that analysts and the financial media eagerly exclude from earnings reports and hastily send into oblivion where they don’t matter. But for now, the FANGMAN index shows that there is a price to pay.