Hurricane Harvey has been described as the storm that didn’t discriminate, inflicting an estimated $125 billion in damage to rich and poor alike. But community leaders say residents in the poorest neighborhoods have fared the worst. (Aug. 23)
AP

The agency’s misstep has put the survivors of Hurricanes Harvey, Irma and Maria and the California wildfires “at increased risk of identity theft and fraud,” according to the report from John V. Kelly, acting Inspector General for the Homeland Security Department.

FEMA is a division of Homeland Security.

The breach occurred because proper safeguards were not taken for disaster victims who participated in FEMA’s program to provide transitional shelter to survivors left homeless, often placing them in hotels and other temporary lodging arrangements, the report said. 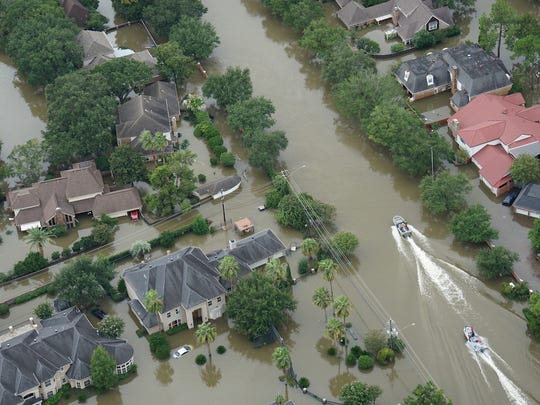 In a March 8 letter to Kelly included in the audit, FEMA Associate Administrator Joel Doolin acknowledged the breach and said the agency “has taken aggressive action to mitigate the issues raised within this report.”

Doolin’s letter says the agency “acted immediately to stop the flow of excess data” of personally sensitive information as soon as it received the Inspector General’s draft report in November.

The contractor was not identified in the report because it was redacted.

Although not required to do so, the contractor could have alerted FEMA that they were receiving unnecessary personal information and the agency “may have been able to remedy this situation earlier and avoid additional privacy incidents,” the report said.

The four disasters in 2017 left tens of thousands across several states and U.S. territories homeless and caused billions in damage.

Hurricane Harvey caused massive flooding in Texas. Hurricane Irma walloped the Gulf Coast of Florida. Hurricane Maria devastated Puerto Rico and the U.S. Virgin Islands. The California wildfires – about 9,000 of them – scorched more than 1 million acres in the state.