Corrections & Clarifications: A previous version of this story misstated the length of Baer’s suspension.

San Francisco Giants president and CEO Larry Baer has been suspended without pay through July 1 following Major League Baseball’s investigation into a physical incident between Baer and his wife.

MLB commissioner Rob Manfred announced the suspension in a news release Tuesday, explaining that after reviewing the results of the investigation, he found that Baer’s conduct was “unacceptable … and warrants discipline.” Baer will be suspended for three additional months and “undergo an evaluation by an expert to determine an appropriate treatment and counseling plan,” according to the league.

“In determining the appropriate level of discipline, I find that Mr. Baer should be held to a higher standard because as a leader he is expected to be a role model for others in his organization and community,” Manfred said. “Based on my conversation with Mr. Baer, it is clear that he regrets what transpired and takes responsibility for his conduct.”

Baer was captured on video engaging in an argument with his wife that turned physical earlier this month. Video of the incident shows Baer attempting to grab something out of his wife’s hand, causing her to flip over on a chair and fall on the ground. 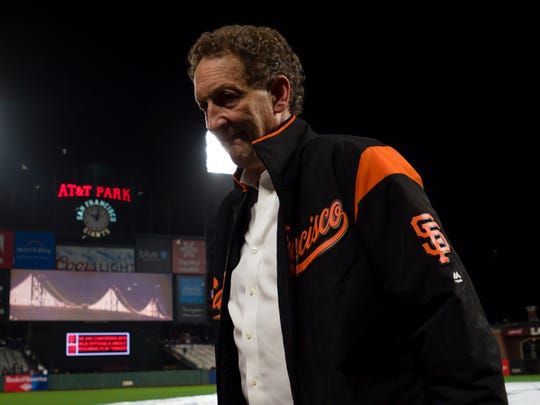 Baer, who has been with the Giants since 1992, has been on a leave of absence since March 4. He said in a statement Tuesday that he accepts Manfred’s decision.

“I made a serious mistake that I sincerely regret and I am truly sorry for my actions,” Baer said in part. “My unacceptable behavior fell well short of what must be demanded of every person, particularly someone in my position and role in the community. I will now immediately begin the significant work ahead of me to listen and learn from my mistakes and to seek professional advice.”

Baer has been the “control person” for the Giants since 2011, which meant he represents the franchise at owners’ meetings. He’s had significant influence throughout the organization since the late Peter Magowan purchased the club in 1992, and was one of two Giants representatives who met with Bryce Harper before the free-agent slugger signed with Philadelphia Phillies earlier this month.

The Giants’ Board of Directors said in a statement that Baer’s punishment was “appropriate” and that interim CEO Rob Dean will continue to serve in his role. The board also noted that the club will designate a new control person upon Baer’s return, though Baer will retain his titles of CEO and team president.