In Singapore, the punishment for having a gun is to be beaten with canes with no less than six strokes.
USA TODAY

New Zealand’s rapid decision to ban the semi-automatic weapons used in last week’s mosque massacres brings the country in line with such stricter-gun-law countries as Australia, the United Kingdom, and, to a lesser extent, Canada.

At the same time, New Zealand is one of only three countries, including the United States and much of Canada, that does not require registration of most firearms other than handguns, a “loophole” to those who support registration as a key pillar of gun control.

The New Zealand ban also is not across the board. It specifically zeroes in on the weapons used in the killing last Friday of 50 people at the Christchurch mosques, but does not include semi-automatic .22-caliber or smaller guns that hold up to 10 rounds or semi-automatic and pump-action shotguns with non-detachable magazines that hold up to five rounds.

An examination of the gun laws of a dozen countries in Europe, Asia and the Americas shows an equally wide variety of approaches, each tailored to a country’s own history and political orientation. The ban on weapons in Japan reflects a cultural orientation dating to the 1700s, when gun ownership was almost totally eliminated. 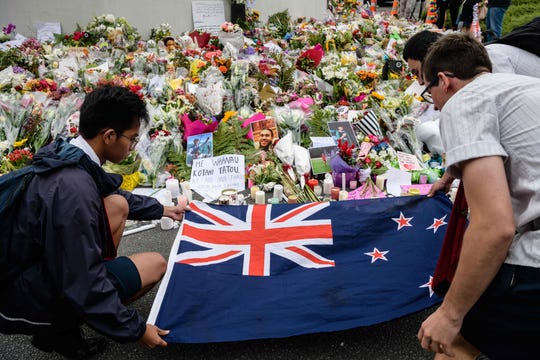 Students display the New Zealand national flag next to flowers during a vigil in Christchurch on March 18, 2019, three days after a shooting incident at two mosques in the city that claimed the lives of 50 Muslim worshippers. (Photo: Anthony Wallace, AFP/Getty Images)

The approach to gun laws in each country also varies widely depending on whether owning a gun is considered a right or a privilege.

Even then, laws do not break cleanly between lax and strict. Many countries have a mix.

Panama allows the private possession of semi-automatic assault weapons, according to extracts of Panamanian law posted by gunpolicy.org, It permits concealed carry and makes the application process for a gun permit simple. Yet the process can take up to a year.

A look at how some countries deal with guns:

Singapore has perhaps the world’s strictest gun laws. Ordinary citizens are not permitted access to any firearms and, if caught, are physically beaten by caning with no less than 6 strokes, according to the Arms Offences Act.  Anyone who uses a firearm while committing a crime faces a mandatory death sentence, even if no one was killed or injured, according to the Act.

After a mass shooting in 1996, when a gunman killed 35 people and injured 23 in Port Arthur, Tasmania, Australia’s government moved quickly to restrict ownership of pump action shotguns and high capacity semi-automatic rifles with more than five rounds. In buyback programs, Australians turned over 650,000 assault weapons. Gun owners are now required to demonstrate a “genuine need” for a particular type of gun, which doesn’t include self-defense, and to take a firearm safety course. License holders also must meet strict storage requirements, including keeping ammunition stored separately.

Under its new President Jair Bolsonaro, Brazil is moving to overhaul its gun laws to expand the number of people who can own them. “The people decided in favor of buying guns and ammunition and we can’t deny what the people want at this moment,” Bolsonaro said in January at a televised signing ceremony for the new decree. It establishes a wide range of categories for who qualifies for gun ownership, including citizens living in rural areas, in urban areas with high levels of homicide, business owners, gun collectors and hunters. Prospective gun owners can’t have a criminal record and must still take a psychological exam, a course at a gun club and be at least 25 years old.

Only police officers, members of the armed forces, or individuals with written permission from the Home Secretary may legally own a handgun. Individuals must obtain either a Shotgun Certificate or a Firearm Certificate, the Marple Rifle and Pistol Club notes. While individuals can be permitted to own a gun for “good reason,” which does not include self-defense. According to guidance from the Home Office, determining what is a “good reason” is “one of the most substantial and complex areas of discretion that chief officers may exercise in licensing firearms.” Even hunters who want to shoot game on their own property don’t automatically get a license. Police are allowed to determine, for example, whether the land in question contains the specific wild game suitable for the firearm being sought.

A license is required to own any of three categories of guns: non-restricted, restricted, such as certain types of semi-automatic guns, and prohibited, such as automatic weapons, sawed-off shotguns and rifles under a certain length. Licensees must complete a restricted firearms safety course, covering basic handling and safety practices, and pass a test. Under the Firearms Act, applicants for a license must provide extensive information on their mental health, employment and marital status. Applicants, as well as their doctor in some cases, may also be interviewed. The waiting period is a minimum of 28 days. Aside from those who use a weapon in their work, individuals can only own a restricted gun for target shooting and for a gun collection. Owners of non-restricted guns must put a lock on the gun or remove the bolt, so it cannot be fired, or else keep the gun locked in a container or room that is difficult to break into, according to CTV News.

Civilians are not permitted to have guns and can face life imprisonment for trafficking firearms. Individuals can get a firearm for hunting only after a strict licensing process. Conviction for illegal possession or sale of firearms is punishable by up to 10 years in prison, and up to life for arms trafficking, according to the Supreme People’s Court.

Gun control in Japan dates back to the mid-16th century. Under the Firearm and Sword law, shotguns, air guns, guns with specific research or industrial purposes, or those used for competitions, are legal, according to an analysis by the Library of Congress. Even then, prospective owners must undergo formal instruction as well as written, mental and drug tests and a rigorous background check. Prospective owners must also explain how and where the weapons will be stored and make them available for annual inspection.

Norway does not allow concealed or open carry, but with a specific permit allows some people to own semi-automatic rifles. Weapons are individually licensed by local police who can revoke them “if the holder is not sober and reliable or if for special reasons he can be considered unfit to have firearms,” according to Norway’s Firearms Act. Likewise, the license can be pulled if the local police conclude the individual no longer has a need for it. Self-defense is not accepted as a valid reason for obtaining a gun license. Fully automatic weapons are generally not permitted, but semi-automatic weapons are legal. For individuals interested in handguns for sport, they must show continuous activity in the sport for two years before they can get a license to possess their own firearms. The firearms or their vital components must be stored securely in an owner’s residence, with police allowed to make inspections after a 48-hour notice.

Guns play a unique role in Switzerland because of its militia armed forces made up of conscripts or volunteers who are allowed to keep their weapons at home. Once they have completed their military service, former members can keep their service weapon if they obtain a firearms acquisition license. Automatic military firearms are converted to semi-automatic firearms. In  2011, a referendum failed that would have prohibited this keeping of weapons at home failed. It had been prompted by several incidents in which militiamen killed themselves or others with their weaponsd. Since 1999, Switzerland has federalized its gun-control laws, which had been controlled by individual cantons. The Swiss Weapons Act requires an acquisition license for handguns and a carrying license for any permitted firearm for defensive purposes, according to a Library of Congress analysis. Automatic weapons are prohibited outright.

More: The Swiss are heavily armed. But mass shootings are rare here

The Republic recognizes the right to self-defense more strongly than most countries, even if the right to own firearms is not constitutionally recognized. Citizens may obtain concealed-carry permits without declaring a reason and can carry up to two concealed firearms. Police have the authority to conduct inspections of privately stored firearms, after notifying the owner.

The current government is moving to ease restrictions by supporting a “legitimate defense” bill that would, among other things, lower penalties for Italians who kill someone thought to be a threat in their own home, CBS News reports. Concealed carry is permitted and individuals — like a security guard or store owner fearful of a robbery — can even carry a loaded firearm in public after proving a “valid reason.” Such a license is difficult to obtain and must be renewed every year. Individuals can own and keep in their home up to three handguns,12 sports handguns or long guns, and an unlimited number of hunting long guns. Private firearms must be registered at the local police department within 72 hours after purchase. Ammunition must be registered and is normally limited to 200 rounds for handguns and 1,500 rounds for hunting firearms.

Finland, where hunting is popular, has the highest per-capita gun ownership in the Nordic countries. Handgun license applicants are allowed to purchase firearms only if they can prove they are active members of regulated shooting clubs. Before they can get a gun, applicants must pass an aptitude test, submit to a police interview and show they have a proper gun storage unit.