A new study by Philipp Frey of Autonomy, a UK think tank, “The Ecological Limits of Work: on carbon emissions, carbon budgets and working time,” has garnered significant press coverage, but the headlines (“Much shorter working weeks needed to tackle climate crisis – study“, or “Climate crisis: UK should dramatically cut working hours to reduce greenhouse gas emissions, study says“, or “PAY DAY Working a NINE-HOUR WEEK could be the key to saving us all, experts say“) have tended to frame the study as recommending management innovations like the four-day week — here the Sun, correctly (!), busts the frame with “NINE-HOUR” — rather than working through the more radical thinking behind Frey’s study. First, I will consider shorter working days and weeks as a managment technique, and show that such reforms do have beneficial effects for the cllimate crisis, and then I’ll look at what I think Frey’s study is really showing.

What if a strategy existed to increase employee engagement and productivity, resulting in higher customer satisfaction and increased revenue? What if that strategy required implementing a four-day workweek while paying employees as if they were working five? According to Perpetual Guardian, a New Zealand financial services company that implemented the four-day week, it not only works but it also has the potential to become the new working standard.

The process Perpetual Guardian undertook to design, test and eventually implement this four-day model is documented in a white paper published earlier this year. “Most of the process improvements came from staff managing themselves differently,” said Lockhart. “It’s about becoming more aware of how they were spending their time.”

On the day Barnes’ PR firm arranged for him to share the research results on local morning television, his phone rang for the rest of the day, according to Lockhart. Barnes shared how employee engagement scores had significantly increased while stress levels dropped–all while employees were maintaining productivity levels in four work days instead of five. “It started to travel around the world, as people woke up. We got media requests from Sydney, Europe and then the U.S.,” said Lockhart. “We gave up counting how many media stories we’ve had when we got to 4,500.” The four-day week has now become Barnes’ full-time job. “We don’t sell the program; it is a philanthropic effort and we’ve had people from all over the world asking to learn more.”

(Here’s another “knowledge economy” company, Portcullis — Perpetual Guardian is a financial services company — that also went to a four-day week, with success, and apparently with the same desire to share the good news.) So, the idea is to leave pay levels the same, decrease time at work, and maintain productivity with process improvements. It seems that the four-day week can indeed benefit the climate:

But when [the State of Utah] implemented the shorter workweek [for state workers in 2008], the goal was to cut energy use by 20 percent and save the state money — and those big savings haven’t come through yet.

So far, energy use has been reduced — but only by 13 percent. Each of Utah’s 900 government buildings is unique. State energy managers have to figure out how to turn everything off on Fridays — especially the massive heating and air conditioning units… But the good news, for everybody, is that the reduction in Friday commuters and the energy savings in buildings have cut down the carbon dioxide pumped into the local air.

Unfortunately, Utah abandoned the effort after three years, mostly (it seems) because citizens wanted the state offices open five days a week, but also because the energy targets weren’t being met (but never mind the “externalities,” like less pollution due to less commuting.)

Now, to be fair, there seems to be a little too much hand-waving in the relationship between working hours and carbon emissions. For example, in this CEPR study from 2006, “Are Shorter Work Hours Good for the Environment? A Comparison of U.S. and European Energy Consumption“:

However, the relationship between energy consumption and work hours could be more complicated. For example, workers (or families) with less leisure time may dry their laundry by machine rather than drying it on a clothesline. They may not take the time to walk or bicycle to work, but rather drive. These behavioral changes in response to increased work hours would cause energy efficiency to decline as work hours increased. On the other hand, they may have their clothes professionally laundered, or take a cab. While these decisions would increase energy consumption, they would also increase hours worked in the economy, so the effect on this measure of energy efficiency is indeterminate. Finally, they may pay professionals to paint their homes rather than do it themselves. While this would consume the same amount of much energy, it would increase hours worked, thereby increasing this measure of energy efficiency. Of course, as people leave their homes to work, energy savings at home might balance the extra energy consumed at work. Any net effect of work hours on energy consumption is not easy to predict.

It does seem reasonable that hacking commute time down by 20% would save a lot of energy. And it also seems reasonable that something would be saved on HVAC, etc., as Utah showed. As for consumption, I don’t know. I did a good deal of painting around the house when I didn’t have any money. But that doesn’t mean I’d take up the practice again if I had more leisure time. That said, rigor had not improved much when CEPR did a second study, in 2013:

A number of studies (e.g. Knight et al. 2012, Rosnick and Weisbrot 2006) have found that shorter work hours are associated with lower greenhouse gas emissions and therefore less global climate change. The relationship between these two variables is complex and not clearly understood, but it is understandable that lowering levels of consumption, holding everything else constant, would reduce greenhouse gas emissions.

This paper estimates the impact on climate change of reducing work hours over the rest of the century by an annual average of 0.5 percent. It finds that such a change in work hours would eliminate about one-quarter to one-half of the global warming that is not already locked in (i.e. warming that would be caused by 1990 levels of greenhouse gas concentrations already in the atmosphere).

Numbers which might be worth thinking about as a tranche in a multileveled approach to reducing carbon emisisons, but might not be, in the absence of more rigorous modeling. (For example, people might drive recreationally in their newly freed-up leisure, so we really wouldn’t be hacking 20% out of drive time.)

With that, let’s turn to the Autonomy study (which is well worth reading in full). Here is the key portion (I’m using an image because there are charts and an equation): 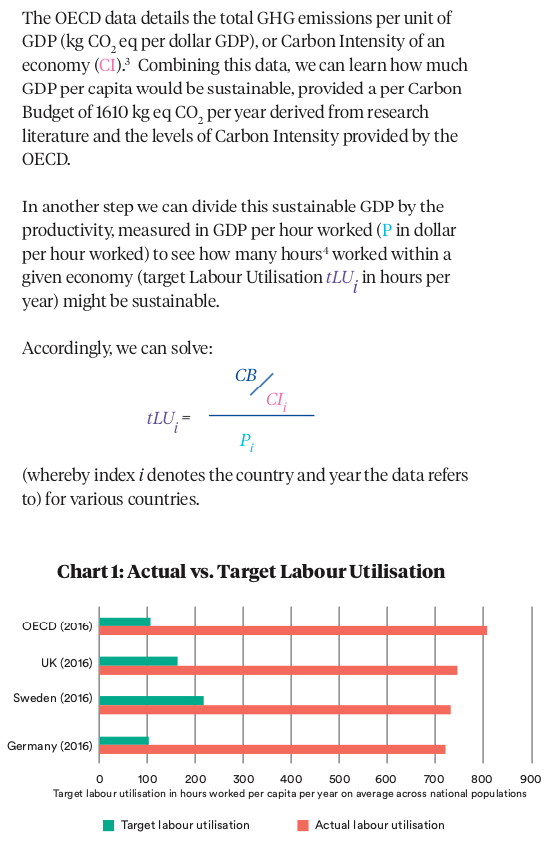 Summarizing, working backwards from a sustainable GDP per capita, we can come to a sustainable level of hours worked to produce that GDP; and it turns out that level is a lot lower than today’s norms. It’s as if Frey, rather than setting a thermostat for comfort level, set it for the sustainable amount of carbon emitted, and as it turns out, the house is pretty cold. The Sun was right: “NINE HOURS.” Think about that…. Frey writes:

I would thus argue that the climate crisis calls for an unprecedented decrease in the economic activity that causes GHG emissions, and this confronts us with, to adapt Paul Lafargue’s phrase, the ‘necessity to be lazy’. If ecological sustainability requires an overall decrease in material consumption, a vast expansion in terms of leisure time and thus an increase in “time prosperity” would be less of a luxury and more of an urgency.

I’m not sure about that, because I won’t be able to get the debt collectors off my back with my new-found “time prosperity.” From CEPR’s 2013 paper:

It is worth noting that the pursuit of reduced work hours as a policy alternative would be much more difficult in an economy where inequality is high and/or growing. In the United States, for example, just under two-thirds of all income gains from 1973–2007 went to the top 1 percent of households. In this type of economy, the majority of workers would have to take an absolute reduction in their living standards in order to work less. The analysis in this paper assumes that the gains from productivity growth will be more broadly shared in the future, as they have been in the past.

Of course, the robots and automation might come to the rescue; but perhaps not. Perhaps the Chinese will crack AI and remove labor from the production of commodities altogether, as David Harvey says somewhere. But perhaps not.

In summary, it seems clear that the management technique of cutting back work hours has merit from the climate perspective and should be pursued (albeit with some added rigor on causality). It also seems clear, as Frey urges, that capital accumulation — that is, after all, what goes on in the workplace — must slow and/or change (toward investment that takes the labor out of production, and especially away from financialization). That’s a heavier lift, but the clarity of Frey’s exposition makes the lift slightly less heavy.