Latest News
Home /James Harden Was the Most Valuable Player. Then He Became Invaluable.

HOUSTON—There is a number guiding the basketball philosophy of the Houston Rockets. This number that informs every decision by the NBA’s wonkiest team and explains the marvelous season of James Harden is a very specific one: 1.16. That’s the number of points per possession they have to score to be the best offense in the history of basketball.

It’s such a powerful number that Rockets coach Mike D’Antoni, who has long been known for strategies that pushed the boundaries of his sport, realized he wasn’t pushing the boundaries enough as soon as he came here and immersed himself in Houston’s analytics.

Mike D’Antoni turned himself into basketball’s Marie Kondo. He decluttered the Rockets. But unlike the Japanese tidying guru, D’Antoni wasn’t trying to spark joy. His benchmark was more objective: 1.16 points per possession. “Anything above that, we try to keep,” he said. “Anything below that, we have to figure out why and get it out.”

The obsession with 1.16 is the driving force behind the most peculiar strategy in basketball. It’s the reason the Rockets have taken the NBA’s pursuit of peak efficiency to an extreme.

“We cut out all the things that don’t work,” D’Antoni said. “Let’s go to the things that work and run it every time until they stop it. If they start stopping it, then we’ll figure something else out. But it’s never been stopped.” 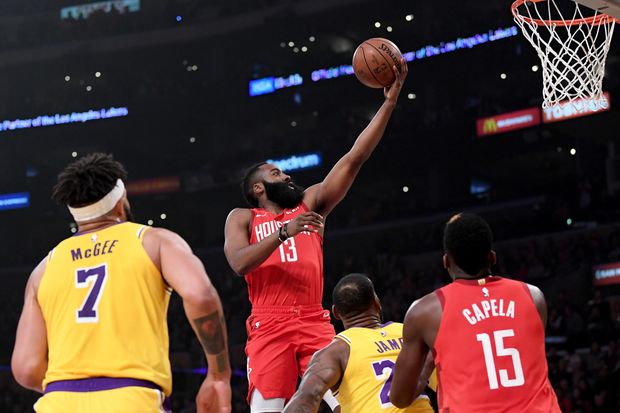 James Harden is averaging more than 36 points this season. That is not a typo.

The league’s reigning most valuable player is putting the finishing touches on a season that’s statistically incomprehensible. He’s averaging 36.4 points per game, the most since Michael Jordan, and yet even that doesn’t capture the full extent of his nightly absurdity. He’s had two 60-point games and two sets of consecutive 50-point games. He’s shooting more threes than Stephen Curry and scoring more points per minute than anyone since Wilt Chamberlain.

But the unrestrained abnormality of his game fully reveals itself when Harden isolates his defender in a one-on-one matchup. It seems logical that what goes up in volume must come down in efficiency. His volume has increased for the last six years. His efficiency has remained almost exactly the same.

Rockets coaches and executives say he’s the greatest one-on-one player of all time. He also may be a back-to-back MVP—he’ll almost certainly be No. 1 or No. 2 in voting for the fourth season in five years—at a time when isolation specialists should be the T-rexes of the NBA. His style of play is deeply inefficient. The average iso this season is worth 0.88 points per possession. That suggests it’s a bad idea. Except it’s not for James Harden.

He turns one of the sport’s worst plays into one of the very best. After scoring 1.22 points per isolation possession last year, it would have been basketball malpractice for Harden to do anything else. And so he didn’t. Harden is No. 1 in volume and efficiency again this season.

Harden was scoring exactly 1.16 points per iso possession as recently as January. He’s since inched down to 1.09 points, and his coach insists it has to be higher as the playoffs approach. D’Antoni is hilariously serious about this. He refused to entertain the premise of a hypothetical universe in which it goes the other way. 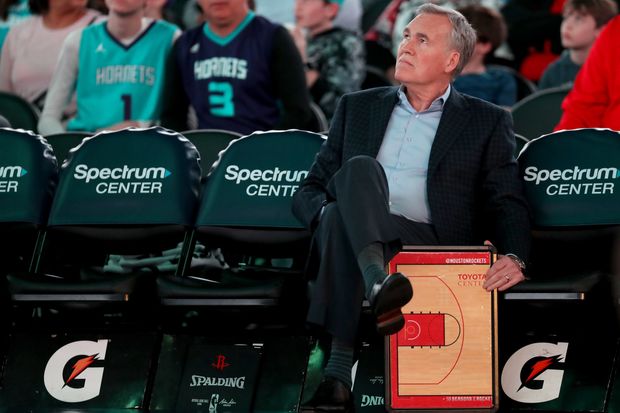 One of the few people in the Rockets’ orbit who doesn’t concern himself with such granular data is the person whose excellence can only be understood through them.

James Harden has his own theory of basketball. It’s that every action has an unequal, opposite reaction.

“If teams want to switch and put me on an island, I’m gonna keep taking advantage of it,” he said in an interview after a recent game. “If they want to double-team like they’ve been doing, I’ll dump the basketball.”

“Whatever they do,” he added, “I counteract.”

Like every successful NBA team, the Rockets are built around the unique strengths of their star player, and they get out of the way when Harden goes to work. They give Harden almost the entire halfcourt to dribble, dribble and keep dribbling once he handpicks his defender and figures out what to do with all that space. 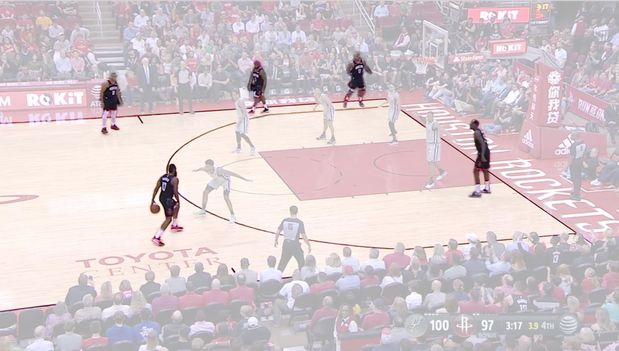 The Houston Rockets clear out and give James Harden all the space he needs to isolate his defender.

There is no good way to stop him once he does. He’s effective in the three most efficient ways of scoring. He gets 1.17 points per shot around the basket. He shoots 88% at the free-throw line and leads the NBA in foul shots for the fifth year in a row. He’s launching so many 3-pointers—Harden is going to break Curry’s record for attempts per game by close to 20%—that even Houston’s radical general manager Daryl Morey is content.

“He might be approaching some sort of limit,” Morey said. “I think this is the first time I’ve ever said that.”

He’s able to do this because he invented a new kind of shot. Curry shoots off the dribble. Harden shoots as he’s stepping away from the basket. He took the most stepback 3-pointers last year. He’s already taken 182% more this year.

But there are some limits to Harden’s game. His heavy workload puts him at greater risk of wearing down. He is not known for his defensive expertise. And his brutally efficient style isn’t for everyone. There are times when rooting for Harden feels like marveling at the subway.

D’Antoni is aware of this criticism. He would rather listen to a clanking radiator.

“Everybody runs to their strengths,” he said. “This is our strength.”

It’s their strength because of Harden. He saved their season when Chris Paul and Clint Capela were injured, and they climbed back into contender status by empowering him to be even more iconoclastic than he already was. That meant more isos.

The beauty of his isos is that they’re a means to the end that everybody can see coming. Harden goes one-on-one to get a layup, get fouled or get off the game’s most improbable shot. A possession that ends with four Rockets watching Harden take a stepback 3-pointer is perfectly acceptable.

It’s worth precisely 1.16 points. It’s the best offense ever.

Write to Ben Cohen at ben.cohen@wsj.com