For the Midwest, Epic Flooding Is the Face of Climate Change Wired

After Standing Rock, protesting pipelines can get you a decade in prison and $100K in fines Grist

Doing Justice by Preet Bharara FT. The deck: “An eloquent lesson that the law is only as good as those who lead it.” Erm, if men were angels, no government would be necessary….

Yes, My Fellow Soldiers Died in Vain The American Conservative

We didn’t want to invite John Walker Lindh to our Memorial Day party, but his potato salad is so damn delicious Duffel Blog

Tory bosses DEMAND contenders face public grilling if they want Theresa May’s job Express. May’s problem wasn’t that she was “wooden,” but that she faced real and irreconcilable contradictions (or, more precisely, contradictions no other individual, faction, or party in Britian’s political class has come close to being able to reconcile). Maggie Thatcher was no Miss Congeniality, after all.

How Hinduism Became a Political Weapon in India The Atlantic

Gone tomorrow Reuters. “Baoshang Bank, linked to missing billionaire Xiao Jianhua, has been brought under state control. Despite threats, Beijing remains wary of allowing even disgraced local lenders to fail.” That seems like a spectacular banking story, even by American standards.

1 big thing: Trump’s tweets lose potency Axios. Interesting, however, to see how disciplined Trump is on his messaging. He’s like Sanders in that regard, although of course their respective styles are very different.

The Case to Impeach Trump for Bigotry The New Yorker

Impeach Trump? Most 2020 Democrats tiptoe past the question AP

“The Times Has Become a Book-Deal Factory”: With a Flood of Star Reporters Thinking of Book Leave, Management Delivers a “Wrist Slap” Vanity Fair (Furzy Mouse).

What’s Great Power Competition? No One Really Knows Defense One. Know your enemy and know yourself?

Venezuela: Representatives of Maduro and Guaido to meet in Norway Deutsche Welle. Not sure what the solution space could be, here, given that Guaido has already tried one failed coup,

U.S. Is a Rich Country With Symptoms of a Developing Nation Noah Smith, Bloomberg. From February, still germane. I think Smith means “syndromes,” though, not “symptoms.”

Elon Musk Says ‘Hyperloop’ Tunnel Is Now Just a Normal Car Tunnel Because ‘This Is Simple and Just Works’ Jalopnik and It’s A Car In A Tiny Tunnel And It Takes An Elevator To Get There Eschaton. What if — just hear me out — there were a way to power cars through tunnels, and the cars could carry fifty or maybe even one or two hundred people at the same time?

SpaceX’s Starlink satellites spark fights between astronomy, spaceflight fans Teslarati (of all places). “As more levelheaded spaceflight fans and astronomers thankfully point out, we need to wait weeks – if not months or even years – to actually understand the potential impact [Low Earth Orbit (LEO)] megaconstellations might have on science and society.” Translation: As usual, the crooks in Silicon Valley dump their product in a public space — the entire night sky, in this case — cash in, and expect others to bear the costs of coping with the “externalities” (see Uber, AirBnB, and of course the criminal enterprise that is Facebook). The tell here is that that Musk didn’t consult with astronomers when developing the business concept or the technology, any more than he consulted with experts on the ground in the Thai cave rescue before publicizing his half-baked mini-submarine concept. Ka-ching. And then of course there’s the radio spectrum:

And these will be emitting in Ka and Ku band by design – frequencies used by radio astronomers like me. There will never be a radio quiet zone for research ever again since these will always be in the Sky day or night. @TheNRAO 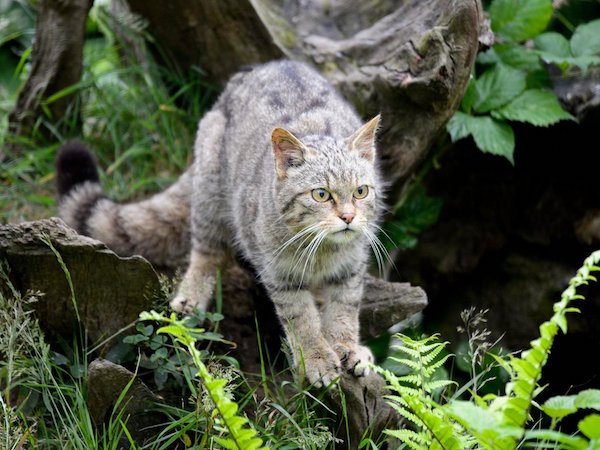 Reintroducing the wildcat to England as part of re-wilding.