What I’m Hearing: USA TODAY Sports’ Dan Wolken describes the buzz surrounding the second-round matchup between Duke and UCF where Zion Williamson will face off with 7’6″ Tacko Fall.
USA TODAY

The NCAA tournament’s second round got off to a thrilling start with LSU’s Tremont Waters scooping in a game-winning layup to sink Maryland and reach the Sweet 16. Then things simmered down and became, well, boring as we witnessed six blowouts.

But the storylines are still aplenty following Saturday’s eight games, and we now have half of our Sweet 16 teams poised for next week’s madness — celebrating their first weekend survival in appropriate fashion.

1. The West is Wild. And by wild we mean loaded. All three of the advancing teams in the West Region — Gonzaga, Florida State and Michigan — looked dominant in dispatching their second-round opponents. The Bulldogs’ high-octane offense showed little sign of slowing down (especially with Brandon Clarke dropping 36 points vs. Baylor), the Seminoles continue to make a statement that they’re on par with the ACC’s three No. 1 seeds, and Michigan’s defense has risen to the level it was at during last year’s national runner-up finish. The West was  thought to be the weakest region when the bracket was unveiled on Selection Sunday, but all three of those teams have shown that whoever comes out of the West could very well be cutting down the nets in Minneapolis in two weeks.

Brandon Clarke passes Adam Morrison for No. 1 on the @ZagMBB single-game #MarchMadness record with 36 points! pic.twitter.com/rLr7GNT3HS

2. LSU is silencing doubters. Still playing without head coach Will Wade (who remains suspended amid an FBI probe that allegedly caught Wade on a wiretap breaking NCAA rules), the Tigers have come together behind interim coach Tony Benford to silence the skepticism that the SEC regular-season champs could play their best basketball while in flux.

“A lot of people counted us out,” guard Javonte Smart told reporters after his team’s heart-stopping win over Maryland that saw Tremont Waters give us the best moment of the tournament so far.

“They didn’t even pick us to beat Yale!” forward Emmitt Williams shouted across the locker room with a throng of reporters nearby.

It’s hard to consider the No. 3 seed an underdog, but the dark cloud hanging over this program made the Tigers an uneasy pick for most fans. On paper, this team probably has the most talent in the entire tournament outside of Duke. But now we’ve seen LSU grow through adversity, showing us its team psyche is way better than many predicted. 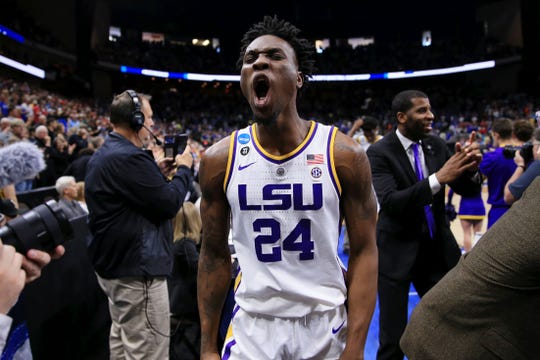 3. Kentucky dodged a bullet. The Wildcats used a smothering defense to limit college basketball’s best 3-point shooter, Fletcher Magee, to 0-for-12 shooting from behind the arc. That or he just had an off day at the absolute worst time. Either way, Kentucky escaped a scary, good mid-major in Wofford, a team that’s usually deadly from outside. More importantly, Kentucky survived its first two NCAA tournament games without its leading scorer and rebounder, PJ Washington, who now gets a full week’s rest for a foot injury he’s been treating. Injuries can make really good No. 2 seeds like Kentucky lose to vastly underrated No. 7 seeds like the Terriers. But somehow, UK came out on top. Coach John Calipari can’t exactly complain about his bracket fortune this time.

4. The SEC and Big Ten have three teams in the Sweet 16 already. While the Big Ten made headlines for going 7-1 in the tournament’s first round, Saturday saw the league go a modest 3-2. Meanwhile, the SEC went 3-1 with Kentucky, LSU and Auburn advancing. SEC tourney champ Auburn, perhaps the most impressive of the bunch Saturday, steamrolled Kansas after barely surviving New Mexico State in the first round. Tennessee and Iowa square off Sunday in a game that will determine which conference sends the most teams to the Sweet 16 — giving one conference four (No. 11 Ohio State also plays, with taller odds vs. No. 3 Houston). The ACC’s Florida State took care of business, and should No. 1 seeds Duke, North Carolina and Virginia win as expected Sunday, the ACC would have four teams heading to the Sweet 16 as well.

More: Kansas goes from preseason No. 1 to being embarrassed by Auburn in March Madness

5. Big Ten champs Purdue and Michigan State are better than we thought. Both regular-season conference champs made quick work of their second-round foes, the Boilermakers reaching their third consecutive Sweet 16 by ousting defending national champ Villanova and the Spartans routing Minnesota. 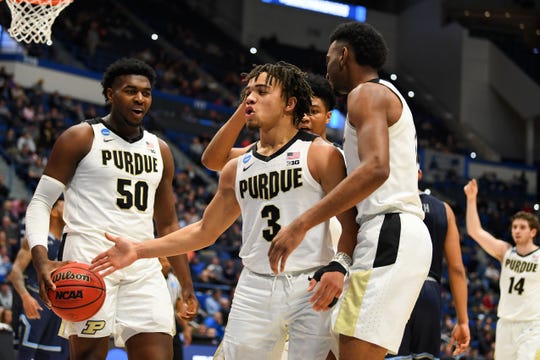 Purdue looked shaky in the Big Ten tourney, losing to Minnesota, but it has regrouped and looked strong in the NCAAs, probably thanks to Carsen Edwards breaking out of a shooting slump; he had 42 against ‘Nova and 26 vs. Old Dominion after shooting 21 percent from 3-point range in the three games before that this March. The Boilermakers led Jay Wright’s squad by as many as 35. It also was a performance that bodes well for Purdue’s Final Four stock considering the South Region’s main challengers — Virginia and Tennessee — are considered more beatable than other regions.

The Spartans had a scare in the first round vs. No. 15 seed Bradley to give pause to their Final Four potential, and though they pummeled the Gophers behind hot shooting and a stifling defense, they still turned the ball over 22 times. MSU still has weaknesses, but the continued progress of recovering-from-injury big man Nick Ward gives this team a different dimension, and Cassius Winston is as good of a floor general as there is in this tournament.

6. The Ja Morant show is over. All-American point guard Ja Morant gave us our first triple-double in seven years in an electrifying first-round performance to lift Murray State over Marquette. There were flashes of that brilliance in Saturday’s second-round clash with Florida State, starting with a barrage of 3-pointers early on as the future NBA lottery pick finished with 28 points on 8-for-21 shooting. But, ultimately, Morant couldn’t provide a Steph Curry-esque tournament run, and some of his weaknesses were exploited by a sound FSU defense.

More: Murray State’s Ja Morant impressive again in what might have been his last college game

Morant’s college career is likely over and he’ll bring his highlight-reeling ways to the next level. Regardless, 2018-19 was a success; He was the first player to average 20 points and 10 assists in a season since assists became a stat in 1983. But even if his NCAA tournament showing were short-lived, he still gave us moments like this to hold onto.

MARCH SADNESS: THE AGONY OF DEFEAT IN THE NCAAS