SportsPulse: The Zion vs. Tacko duel lived up to the hype in the most exciting game of the tournament. USA TODAY’s Scott Gleeson breaks down how Duke was able to avoid a historic upset.
USA TODAY

COLUMBIA, S.C. — There was always a danger of this for Duke, even as the No. 1 team in college basketball won all but one game this season when fully healthy.

Imperfectly constructed, crazy reliant on youth, often prone to tossing bricks at the rim, the margin between history and infamy was set up to be dangerously thin.

And on Sunday night, at the very last moment of a second-round howitzer of an NCAA Tournament game, that margin was literally one roll of a ball off the rim.

Duke escaped the second round, 77-76, barely holding on to beat No. 9 seed Central Florida when B.J. Taylor’s runner caromed too strong off the glass and a follow-tip by Aubrey Dawkins caught three different parts of the rim before gravity pulled it off to the side. 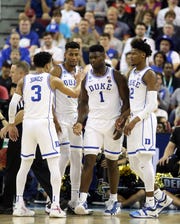 As Duke coach Mike Krzyzewski acknowledged, Duke got a little bit lucky. But a team constructed around three lottery picks shouldn’t need to feel as if it won the lottery just to beat the third-place team from the American Athletic Conference, even in a crazy format like the NCAA Tournament that is built for monumental opening-weekend upsets.

Sure, UCF was brilliant, putting forth one of the best losing efforts in recent memory. Dawkins, the son of head coach Johnny Dawkins, seemed practically automatic, scoring 32 points on 12-of-18 shots. Tacko Fall, the 7-foot-6 giant who wasn’t so gentle when he had to defend Zion Williamson on Sunday, had a huge impact on the game.

And the game plan put together by the elder Dawkins, dropping his defense completely off Duke’s poor outside shooters and using Fall to take up space near the rim, nearly worked to perfection.

But the thing is, it’s now clear how easy Duke’s offense is to discombobulate because for all the great recruiting of McDonald’s All-Americans that Krzyzewski has done recently, this year he forgot to get a couple who can shoot.

Tre Jones, the Blue Devils’ defensive bulldog of a point guard, was too quick to oblige UCF’s strategy by going 1-for-8 from the 3-point line, at one point hoisting jumpers on three consecutive possessions that completely changed the energy of the game when it looked as if Duke might be able to pull away. In the second half, Duke shot just 35% and needed every last one of them to escape into the East Regional semifinal.

Give Duke this much: Led by Williamson, this is a ferociously competitive bunch with a deep reserve of guts and a nose for the ball when it matters. Down four with less than two minutes left and searching for answers on offense, a 3-pointer by wing Cam Reddish pulled Duke back within range.

Then, down 76-73 with less than a minute left, we got the confrontation America had been waiting for: Williamson challenging Fall at the rim, seemingly everything on the line. Fall had blocked Williamson three times already in the game and fouled him a couple more. This time, Williamson skied high in the air, the way he typically does for dunks. But this time, he leaned backwards, banked in a layup and drew Fall’s fifth foul.

Though Williamson missed the free throw that would have tied the game, Duke freshman R.J. Barrett was able to sneak in for a putback that finally gave Duke the lead with 11 seconds left.

We shouldn’t have been surprised. Though not as dramatic as this one, Duke has been the classic “find a way to win” team this season, losing just once when fully healthy, way back in November to Gonzaga.

Having that kind of will is extremely valuable in an NCAA Tournament. But so is the ability to make outside shots to put away games, which the Blue Devils just don’t seem to have. That hasn’t mattered yet for Duke. As they advance deeper in this tournament, it’s really going to matter now.