New Zealand’s Office of Film and Literature Classification issued a statement officially classifying the manifesto – titled “The Great Replacement” and authored by the alleged 28-year-old shooter – “objectionable” under the country’s law.

“There is an important distinction to be made between ‘hate speech’, which may be rejected by many right-thinking people but which is legal to express, and this type of publication, which is deliberately constructed to inspire further murder and terrorism,” New Zealand’s Chief Censor David Shanks said in a statement.

“It crosses the line.”

The alleged gunman, a self-described white supremacist, is accused of fatally shooting 50 people on March 15 in a rampage in two mosques that he live video-recorded on a helmet he wore. He linked the manifesto on his Twitter account and mailed a copy to the office of New Zealand Prime Minister Jacinda Ardern. 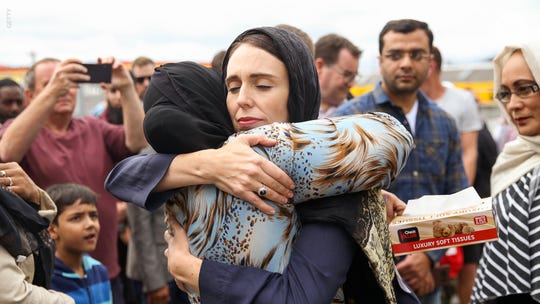 The country’s government banned the reported gunman’s 17-minute video earlier in the week as well as semi-automatic rifles.

Officials say both the manifesto and video qualify as objectionable under a 1993 New Zealand law that gives the government discretion to ban certain materials for the public good.

An objectionable classification in this particular case is considered to be a justifiable limit on freedom of expression under New Zealand’s Bill of Rights.

The suspect’s manifesto consists of a rant about white genocide and advocates for “an atmosphere of fear” against Muslims. He describes himself as an ethno-nationalist and fascist and pays homage to other racist killers such as Dylann Roof, who shot and killed nine African-Americans in a church in Charleston, South Carolina. He says in the manifesto that the plot in New Zealand was two years in the making.

“It promotes, encourages and justifies acts of murder and terrorist violence against identified groups of people, ” Shanks said.

“It identifies specific places for potential attack in New Zealand, and refers to the means by which other types of attack may be carried out. It contains justifications for acts of tremendous cruelty, such as the deliberate killing of children.”

Violent terrorist: Who is the white supremacist suspected in New Zealand mosque shootings?

Under the New Zealand law, it is considered an offense to “posses or distribute” objectionable materials such as the manifesto. People who have downloaded the document, or printed it out, should “destroy any copies,” officials said.

“New Zealanders can all play a part in denying those who exhort hatred, killing and terror. If you have a copy of this publication, delete or destroy it,” Shanks said. “If you see it, report it. Do not support the murderous objectives of its author by republishing or distributing it.”

The manifesto has been widely reported by media, meaning some New Zealanders are likely to have read portions of it even if they have not seen a first-hand copy.

Survivors tell their stories: ‘I was the last person to get out alive’: Narrow escape from New Zealand mosque

Shanks said that the use of excerpts in media reports “may not in itself” violate the law but that “ethical considerations will certainly apply.”

“Real care needs to be taken around reporting on this publication, given that widespread media reporting on this material was clearly what the author was banking on, in order to spread their message,” he said.

Reporters, academics and others can apply for an exemption from the government to obtain a copy if the reason is deemed for “legitimate purposes, including education, analysis and in-depth reporting.”