SportsPulse: We have our Sweet 16 and it’s loaded. USA TODAY’s Scott Gleeson gives each team a reason to feel like they can win (or lose) it all.
USA TODAY

I’m not sure what was worse, that UC Irvine coach Russell Turner thought it was OK to be homophobic or degrade women in taunting an opposing player, or that he thought it was funny.

It wasn’t either of those things.

Turner lingered with Oregon’s Louis King in the postgame handshake Sunday night, after the Ducks had beaten the Anteaters to reach the Sweet 16. When asked about it afterward, Turner said he’d tried to rattle the Ducks’ second-highest scorer by calling him “Queen.” Encouraged his players to do it, too.

“I was saying `double team Queen’ to try to see if I could irritate him. And I did. And I kept talking to my team about what we wanted to do,” Turner said, smiling proudly. “We were calling him queen, because I knew it might irritate him.”

That’s right. A 48-year-old man showing all the maturity of an 8-year-old to try to get an edge.

UC Irvine must be so proud. 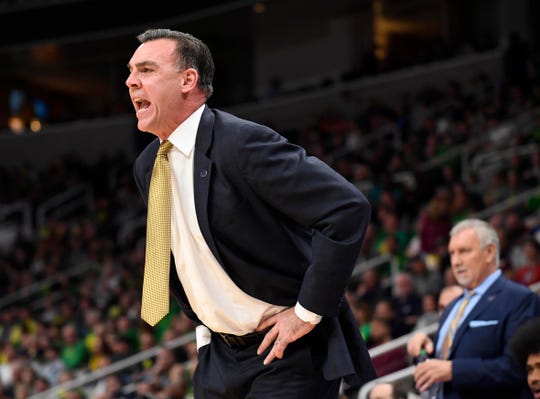 RANKINGS: Which Sweet 16 team is most likely to win it all?

Turner claimed it was a sign of respect, that he was likening King’s importance to Oregon to that of the queen in chess.

But that makes no sense. In the history of trash talk, nobody has ever used a chess analogy as an insult. Also, Turner was trying to rattle King by … complimenting him? So if the Anteaters had played Duke this year, he would have razzed Zion Williamson by calling him “leading scorer” or “first-round draft pick?”

No, Turner was trying to get under King’s skin by questioning either his sexuality or his masculinity. It really doesn’t matter which it was; in Turner’s view, being gay or being a woman is equally demeaning and worthy of ridicule.

“It was in poor taste,” Ativea King said.

Since Russel Turner decided it was ok to try and publicly humiliate my son by calling him queen although he doesn’t get fazed by it. Me and his dad as his parents would like for him to publicly APOLOGIZE to louis. It was in poor taste. The incident is trending all over Twitter

It was more than that, actually. Words matter, as do the messages they send, and the casual homophobia and misogyny of Turner’s taunts perpetuates the marginalization of both gays and women. That’s not only disappointing, it’s dangerous.

When women or members of the LGBTQ community are discriminated against, harassed or worse, it doesn’t happen in a vacuum. It happens because they are considered “less than,” not as deserving of equality or respect. It’s OK to humiliate or attack them because they’re not as important. Their lives – their health, their safety, their self-esteem – mean less.

That Turner, at his age and with his life experiences, thinks this way is appalling. That he’s in a position, as the Anteaters’ head coach, to pass on his bigotry is unacceptable.

Studies have shown we are not born with prejudice or bias. They’re learned behaviors. And the UC Irvine players are still impressionable, teenagers and young men living on their own for the first time and trying to figure out what kind of adults they’ll be.

Maybe they’ll embrace the values they learned from their parents or follow the example set by a favorite teacher. Maybe they’ll be influenced by the friends they make at school or have their eyes opened by classmates of different genders, races and sexual orientation.

But some players will hear Turner’s bigoted comments or pick up on his small-mindedness and think that that’s OK. That they’re entitled to belittle and mistreat others.

And what if there’s someone on Turner’s team who is gay? Imagine how unwanted and alone he would have felt not only hearing Turner insult King, but encouraging his other players to use the slur, too.

The heckling of King wasn’t very effective, given that Oregon won and he had 16 points on five-of-10 shooting. But that doesn’t make it any less important to call Turner out.

Ignorance and bigotry are never funny. They’re never appropriate. Shame on Turner for thinking they were.