Latest News
Home /Opinion: Possible confrontation between Zion Williamson and Tacko Fall will be bigger than the game
CLOSE

What I’m Hearing: USA TODAY Sports’ Dan Wolken describes the buzz surrounding the second-round matchup between Duke and UCF where Zion Williamson will face off with 7’6″ Tacko Fall.
USA TODAY

COLUMBIA, S.C. — For perhaps the first time in college basketball history, the biggest draw in an NCAA Tournament is the possibility of a single play that may not ever happen.

As much as it is a game between two teams, Duke vs. UCF is also proxy for a made-for-social-media clash between two unique bodies who could potentially meet at the rim Sunday, creating a moment that will cause millions of fans to hold their breath.

“We can’t make it bigger than what it really is,” said UCF’s 7-foot-6 center Tacko Fall, which is only true in the most literal sense. When it comes to the possibility of a 6-foot-7, 285-pound highlight reel trying to dunk on one of the tallest humans in the world, it is impossible to make it bigger.

Sadly, neither Fall nor Zion Williamson seems to want to play along — at least for now.

Brink of Sweet 16: This point guard has made difference for Oregon

“He is a very unique player,” Williamson said, “and I have a lot of respect for him because for him to be that size and be able to move the way he does and have as much skill as he does, he’s a great player. I think we’re just going to have to come together as a team and figure out what we’re going to do to try to stop him.”

In a sense, this is the culmination of what Williamson’s entire season at Duke has been like. Though he is now regarded as a complete player and a true force of gravity on both ends of the floor, it is still Williamson’s quick-twitch takeoffs and powerful, above-the-rim finishes that make him the most Instagrammable athlete in sports. Even when we think we’ve seen his best dunks, Williamson usually finds a way to offer up a little more.

So the natural progression that America so badly wants would be Williamson rising up Sunday with Fall blocking the rim, just to see whether Williamson in full flight is capable of punching one on the tallest player in college basketball.

“It’s only one play,” Williamson said. “It can happen. It may not happen. I can’t base the whole game on one play.” 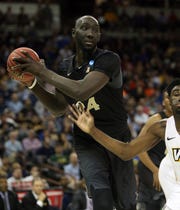 Williamson’s response to all the questions about facing Fall on Sunday only underscored why he’s going to start signing marketing deals worth nine figures as soon as Duke’s NCAA tournament run ends.

Not only is he shaped differently than any elite athlete we’ve ever seen in basketball, it’s as if his brain was programmed to always say the thing that will appeal to the broadest set of people while also coming off as genuine in the way he says it.

Zion has decided to enjoy being Zion, and if that means he’s got to sit there for 30 minutes and answer silly questions about whether he can dunk on a guy who’s 7-foot-6, he’s going patiently answer every one of them, giving them just enough credence to keep the conversation going while also saying the thing that will deflect attention toward the team.

“Unless we play small-ball, he wont be my matchup,” Williamson said, correctly noting that Marques Bolden and Javin DeLaurier will play center for Duke when they’re in the game. “My game doesn’t necessarily change. Just make the (right) basketball play. Obviously if he’s down there, don’t try to do like a weak layup because he’s obviously going to block it, so you have to make the basketball play. That’s just basketball.”

But as much as the opportunity may present itself for Williamson to confront Fall at the rim, causing Twitter to instantly declare a winner and loser, it’s likely America will leave Sunday having fallen in love with them both.

While Williamson is going to be the first pick in the NBA Draft, the culmination of a star journey that began when he was 16, Fall’s basketball future is unknown. A native of Senegal who didn’t even really pick up basketball until he was 16, Fall thinks he can play in the NBA, even as the league moves away from traditional big men. At the very least, has turned himself into an effective college player over the course of four years at UCF.

Though he isn’t the world’s quickest mover, sometimes fights foul trouble and doesn’t shoot free throws very well (36% this season), 7-6 is still 7-6, and when Fall can get the ball around the rim, it’s usually an automatic two points (he’s made 75% of his field goals three of his four seasons).

“I came very far just as far as confidence and experience because I haven’t played the game for long,” said Fall, who speaks several languages, has studied to be a computer engineer and wants to use his platform to help eradicate poverty in his home country. “I was really trying to catch up and I’ve worked really hard and had a lot of people helping me along the way. I went through a lot, had surgery on my shoulder last year and just kept studying the game and my love for the game kept growing until it just clicked.”

Fall’s story is an incredible one, and even his trash talk is endearing. In an interview Saturday night with Andy Katz of NCAA.com, he said of the possibility Williamson might try to dunk on him: “I won’t allow it. I won’t allow him putting me on one of his highlight tapes.”

Naturally, Williamson took it in the good humor with which it was offered, brushing it off by suggesting Fall shouldn’t have said anything else.

“Is he supposed to say that I’m going to dunk on him?” Williamson said. “He’s a competitor, so obviously he’s going to say he’s going to block my shot. Like, that’s just basketball.”

But hey, if that moment happens Sunday, nobody watching is going to complain — even it’s just one play out of hundreds that will determine which team advances to the Sweet 16.