Americans should put new boot prints on the moon within five years, the Trump administration said Tuesday, attempting to harness the Space Race urgency that drove Apollo astronauts to the lunar surface 50 years ago this summer.

Calling on NASA to achieve that goal “by any means necessary,” Vice President Mike Pence sought to unveil an inspiring exploration vision and also put current NASA programs on notice that their slow progress is unacceptable.

“If NASA is not currently capable of landing Americans on the moon in five years, we need to change the organization, not the mission,” he told the National Space Council in Huntsville, Alabama. 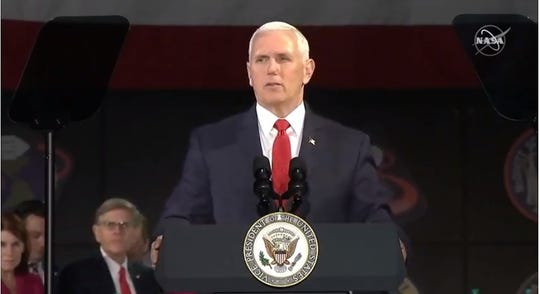 Previous plans aimed to plant another U.S. flag on the moon by 2028, after spending several years visiting a small space station called the Gateway in orbit around Earth’s closest natural satellite.

Pence’s more ambitious direction came two weeks after the administration requested a slight cut to NASA’s current $21.5 billion budget, raising obvious questions about how the moon landing program can be accelerated without an infusion of money.

“We don’t have a landing vehicle, no elements of the proposed Gateway have been launched, and the choice of launch vehicle for such a mission has not been made,” said Logsdon, a professor emeritus at George Washington University. “I will be very interested in seeing how Pence’s policy goal is translated into an executable and affordable plan.”

The $10 billion rocket was supposed to launch an Orion crew capsule on an uncrewed test flight by next summer, but might not be ready to fly from Kennedy Space Center before 2021.

NASA recently studied whether commercial heavy-lift rockets could launch the capsule on its Exploration Mission-1 instead.

But NASA Administrator Jim Bridenstine on Tuesday told Pence that will not be possible on the current timeline and budget, and he was confident the SLS could get back on track.

That was cause for applause from an audience drawn largely from NASA’s nearby Marshall Space Flight Center, which is responsible for developing the SLS along with lead contractor Boeing.

U.S. Sen. Richard Shelby of Alabama, who heads the Senate Committee on Appropriations, remains an influential backer of the “monster” rocket.

But Pence repeated the threat that NASA would seek alternatives if the SLS, which has faced criticism since its inception, failed to stay on schedule.

They heard strong support for NASA, and a promise to provide longer-term budgets and to ease contracting rules that have proven “a killer” for past programs.

“We all know that getting back to the moon in five years is very possible,” said Thomas, an engineering professor at the University of Alabama in Huntsville. “There are no big technology hurdles we have yet to solve. The thing is how NASA has to do business.”

Pence called on NASA to attack the new mission with “urgency,” insisting there is a new space race to beat other nations to the moon and maintain American leadership.

However, Logsdon said that China is not planning a human lunar landing until after 2030, and Russia’s space program is in weak shape.

If achieved, a 2024 moon landing would deliver an exploration triumph just before the end of Trump’s presidency, should he win a second term.

National Space Council members and panelists discussed a need for the nation to accept more risk and a willingness to “fail smarter” along the way. But astronauts and independent safety advisers are sure to scrutinize any hint of a rush that creates undue schedule pressure, a factor in two shuttle disasters.

“I think our community is up for it,” former astronaut Sandra Magnus told Pence. “I think it will be challenging. We want to make sure that we’re doing it safely as well.”