By Howie Klein. Published at DownWithTryanny!

The Deseret News in Utah is far more conservative than the Salt Lake Tribune. But last week, the paper’s ran an OpEd that one wouldn’t expect to see in a right-wing Republican newspaper, America Has Gone Too Long Without Raising The Minimum Wage. “June 16 marks the longest period in history without an increase since the federal minimum wage was established in 1938. The federal minimum wage went to $7.25 an hour on July 24, 2009– nearly 10 years ago. It remains $7.25 today, amounting to just $15,080 a year for full-time work. When the minimum wage does not go up, it goes down in value relative to the cost of living. The gap between minimum wage and the cost of rent, groceries, medicine, transportation and everything else keeps growing. That matters whether you’re trying to work your way through school, support your child or need a job to make ends meet on Social Security. The buying power of today’s $7.25 minimum is lower than the minimum wage of 1968, which would be $11.96 in 2019 dollars, according to the U.S. Bureau of Labor Statistics Inflation Calculator. Our economy has grown considerably since 1968, but not the federal minimum wage, which sets the floor under worker pay.” 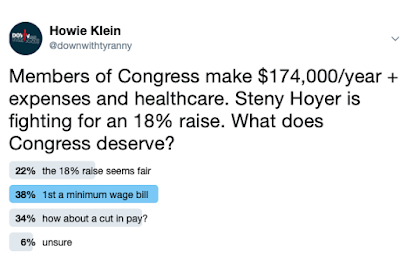 As we saw Sunday evening, Steny Hoyer is willing to put everything on the line to get a raise— for members of Congress. Enough Democrats agreed that– at the very least– this looked out of touch with the economic realties of the country that Hoyer was reigned in by his own caucus. 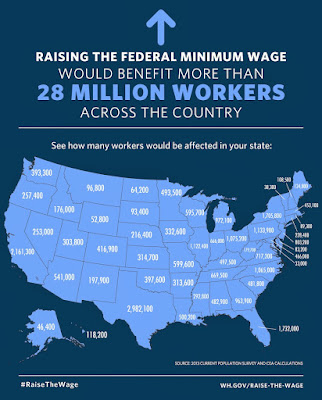 There’s no chance a minimum wage increase is going to be enacted with McConnell running the Senate and Trump in the White House, but Pelosi had campaigned on passing a $15 minimum wage, not in her first 100 days as speaker but in her first 100 hours. She hasn’t delivered. On January 16, Bobby Scott (D-VA) introduced a great piece of legislation, the Raise the Wage Act (H.R.582). The bill would gradually raise the minimum wage to $15/hour. There are 235 Democrats in the House. 205 have signed on as co-sponsors. The last to sign on is a very conservative Blue Dog freshman from Virginia, Abigail Spanberger. The 16 other non-original co-sponsors were virtually all conservative Democrats from the Republican wing of the Democratic Party– members like Ed Case (Blue Dog-HI), Seth Moulton (New Dem-MA), Ami Bera (New Dem-CA), Stephen Lynch (New Dem-MA), Mikie Sherrill (Blue Dog-NJ), Josh Gottheimer (Blue Dog-NJ), Max Rose (Blue Dog-NY), Ann Kirkpatrick (New Dem-AZ), Jim Cooper (Blue Dog-TN) Elissa Slotkin (New Dem-MI)– but at least they signed on! There are still 30 Democrats– THIRTY– who haven’t signed on. That includes 19 freshmen who are being advised to not co-sponsor a bill that raises the minimum wage. How are they even Democrats if they’re taking that kind of advice from Hoyer and the DCCC? These are the freshmen who are notcosponsors. How do any of them deserve to be reelected? 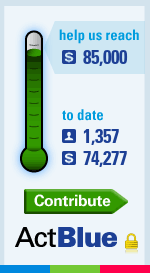 On paper, Pelosi, Hoyer and Jim Clyburn– as well as Blue Dog chair Stephanie Murphy– are original co-sponsors. But if you want to know why there is no bill, look no further than those 4 + Alabama New Dem and corporate shill Terri Sewell (a co-sponsor on paper who is working the hardest to stop the bill from moving). Hoyer, who’s never done anything without a sign-off from K Street, told CNN in mid-May that “We’ll get the votes for the minimum wage bill, but there are discussions about how we can, what actions, if any, should we take to make sure that it is fair.” Fair? Fair to who, the workers who are slaving away on wages they can’t live on? Or fair to Hoyer’s lobbyist buddies’ clients?

It’s most comfortable for Pelosi and Hoyer and their team to blame the lack of progress on the Republicans but the sad reality is that they can’t even get a $15 minimum wage bill through the House they control. This is a touchy item for them. Conservative Democrats want to please business interests that have always and will always oppose the minimum wage– let alone increases to it– but they’re petrified that if their base voters find out that it’s them who are keeping it from passing the voters won’t turn out for them. Nor should they. Pelosi and her leadership team helped set a record yesterday– a shameful record of not raising the minimum wage for the longest period in history. Congratulations, Speaker Pelosi– the longer you cling to power, the worse and worse your legacy turns.