Major stock indexes have rallied this year despite a slowdown in the global economy, in part because central banks have signaled they will back off plans to normalize monetary policy for the foreseeable future.

But signs that momentum continues to cool across major economies have challenged investors, raising questions about whether a soft patch of data could mark the start of a more persistent downturn.

A report Friday showed factory output in the eurozone fell in March at the fastest pace in six years, while a gauge of U.S. manufacturing activity slipped to its lowest level in nearly two years. The data sent bond yields sliding, with the German 10-year bond yield dropping below zero for the first time since 2016 and the yield on the 10-year U.S. Treasury note falling to 2.459%, the lowest since January 2018.

All three indexes posted weekly losses, as did benchmark indexes in France, the U.K. and Germany.

“The global economy has clearly become an issue, with big headwinds there,” said Tim Anderson, managing director at broker-dealer TJM Investments, pointing to mounting worries particularly in Europe and China.

For much of 2019, stocks and bond yields had moved in opposite directions. That troubled fund managers, who noted bond yields typically rise—not fall—when investors are confident in future prospects for growth.

But they moved lower in lockstep Friday, as investors across markets bet on an environment in which growth across the world is expected to slow.

“This confirms the softening data tone the market has been observing and central banks have been forced to take note of,” said Matt Cairns, strategist at Rabobank.

Commodities prices and stock sectors tied to them retreated, underscoring the dimming outlook for the global economy.

The S&P 500 energy and materials sectors lost more than 2% apiece, while copper futures-—which tend to rise when investors expect growth to boost consumption of industrial materials-—settled at their lowest level since February.

Part of investors’ anxiety, many say, stems from doubts about whether central banks’ wait-and-see approach to monetary policy will be enough to avert a global economic slowdown.

Earlier this week, Federal Reserve officials indicated they are unlikely to raise interest rates this year and may be nearly finished with the series of increases they began more than three years ago. On Wednesday, Fed Chairman Jerome Powell suggested the central bank was likely to leave the policy rate unchanged for many months.

This change of tactic by the Fed has divided the market. For some, it is the latest sign that economic growth in the U.S. and around the world is slowing. Others think a more dovish Fed could prolong the bull market.

Amid a shaky marketplace, investors are watching the yield curve for signs of economic stability. History shows that when the yield curve inverts, a recession may soon follow. Photo Composite: Stephanie Swart for The Wall Street Journal.

To be sure, many believe that in the U.S., a recession isn’t imminent.

Corporate earnings, while cooling, are still expected to post single-digit percentage growth in 2019, according to FactSet. The labor market has added jobs for 101 consecutive months, its longest streak ever, and unemployment remains low. 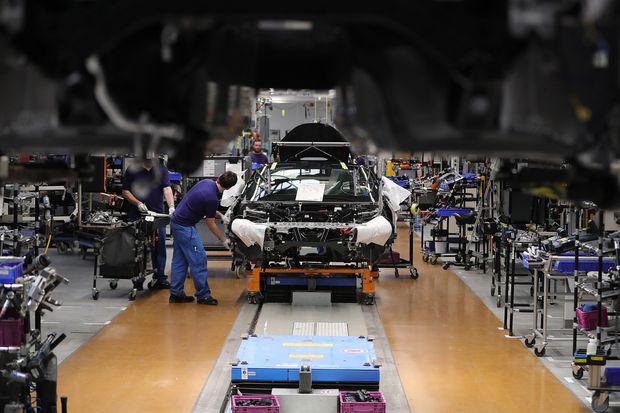 Even weaker segments of the economy have appeared to stabilize in recent months, with data Friday showing sales of previously owned homes soared 12% in February—far more than economists had expected.

But the question investors say they are contending with is whether the slowdown in the eurozone could have a ripple effect, hitting profits at multinationals in the U.S.

In one warning sign, a closely watched yield curve, the spread between 3-month and 10-year U.S. Treasurys, inverted Friday for the first time since 2007.

Investors and Fed officials closely watch the dispersion of short- and longer-term yields because the three-month yield has exceeded the 10-year yield ahead of every recession since 1975. 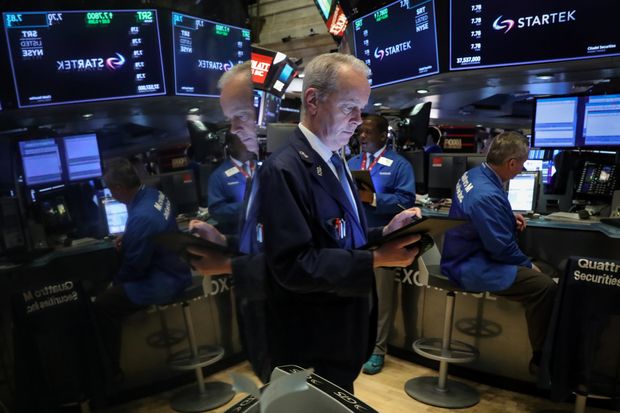 Traders on the floor at the New York Stock Exchange on Friday.

In another sign of pessimism, traders doubled down on bets that the Fed will go as far as lowering rates soon—something they haven’t done since the midst of the financial crisis in 2008.

Federal-funds futures, used by traders to place bets on the course of monetary, showed the market pricing in a roughly 57% chance of the Fed lowering rates by the end of the year, up from 11% a month ago, according to CME Group.

Write to Akane Otani at akane.otani@wsj.com and Georgi Kantchev at georgi.kantchev@wsj.com