Global stock markets fell at the start of the week on mounting concerns that weakening growth around the world could undermine this year’s rally.

On Wall Street, futures pointed to 0.2% opening falls for the S&P 500 and the Dow Jones Industrial Average.

Weak manufacturing data in the U.S. and Europe have added to investor concerns about a slowdown for global growth and fueled worries that it could unravel this year’s stock market upswing. Uncertainty about the outcome of trade talks between the U.S. and China and the outlook for Brexit have also hurt investor appetite for stocks and riskier assets.

Investors have instead sought safety in bonds, pushing the yield on 10-year Japanese government bonds to as low as negative 0.095%, their lowest point since August 2016. The German 10-year bund yield has also slipped into negative territory. U.S. Treasury yields were broadly stable Monday, trading at 2.463% from 2.459% Friday. Yields move inversely to prices. 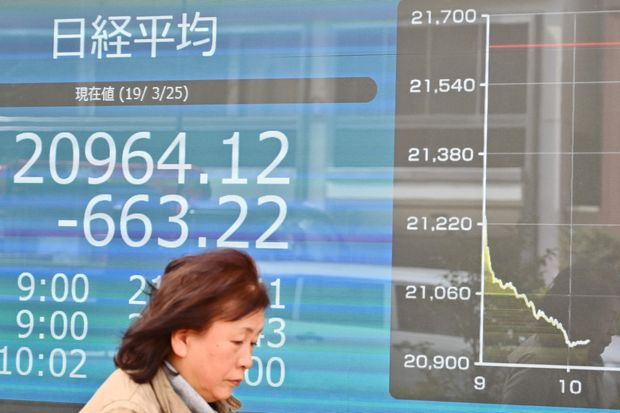 A woman passes a board showing a Nikkei reading on Monday in Tokyo.

“There’s a pretty obvious weakness in growth and markets need to come to terms with that,” said James Athey, senior investment manager at Aberdeen Standard Investments.

Data this week could enlighten the debate over whether the global economy is in the midst of a temporary dip or headed toward a more serious downturn, with fourth-quarter gross domestic product readings from the U.S., U.K., France and Canada on tap.

Major central banks, led by the Federal Reserve, have turned more dovish this year, which many investors see as another sign of an economic slowdown ahead.

At an investment conference in Hong Kong on Monday, Chicago Fed President Charles Evans, a voting member of the Federal Reserve’s interest-rate setting committee, said he didn’t expect an interest-rate increase in the U.S. until next year, probably in the second half.

“We’ve become accustomed to the market greeting dovish central bank turns with a bounce. Not now. The market wonders: What if the Fed is seeing something that we are not?” Mr. Athey said.

In currencies, the WSJ Dollar Index, which tracks the dollar against a basket of 16 currencies, was down 0.1%.

The British pound was down 0.2% as Brexit uncertainty continued to grip currency trading.

Prime Minister Theresa May is facing fresh questions about whether she can stay in office long enough to see Brexit through, as lawmakers enter another critical week of decisions over the U.K.’s departure from the European Union.

Brexit will continue “to dominate the news agenda. We doubt that things will be any clearer by the end of the week,” analysts at Societe Generale wrote in a note to clients.

—Kosaku Narioka contributed to this article.

Write to Georgi Kantchev at georgi.kantchev@wsj.com