Latest News
Home /The Intergenerational Effects of a Large Wealth Shock: Evidence from the US Civil War

Yves here. Even if I knew Birmingham better, it would not serve as a point of reference for this study. Birmingham was incorporated in 1871 and its wealthy was based on industry, not agriculture. I wonder what Harry Shearer would

One striking feature of many underdeveloped societies is that economic power is concentrated in the hands of very small powerful elites. This column explores why some elites how remarkable persistence, even after major economic disruptions, using the American Civil War’s effect on the Southern states. Using census data, it shows that when the abolition of slavery threatened their economic status, Southern elites invested in their social networks which helped them to recoup their losses fairly quickly.

The antebellum South was a predominantly agrarian and extremely unequal society. The unequal distribution of wealth was particularly notable in the agricultural sector, the main economic engine of the South at that time. One peculiar institution of the Southern economy that contributed to the amassing of wealth in the hands of a very few wealthy planters was slavery. Slave labour and fertile soil were the essential inputs for the cultivation of cash crops (cotton, tobacco, rice, and sugar) on large plantations, while small freeholders cultivated small tracts in the hinterlands. Slaves were also financial assets and served as collateral to finance the new businesses of their owners.

Owning slaves in the South reflected economic status and power and was the exception rather than the rule. Only 20% of white Southern households owned any slaves and as little as 0.5% of households owned 50 slaves or more. Although slaveholding contributed to almost 50% of the aggregate Southern wealth, slave wealth was concentrated at the top end of the southern wealth distribution. The great disparity of wealth reflects the economic power of the richest farmers (planters) in the South before the Civil War. In 1860, a household at the 90th percentile of the southern wealth distribution owned 14 times more than a household at the median; for comparison, the 90:50 ratio was roughly 7:1 in the US between 1950–2000 and is at 12:1 today (Kuhn et al. 2017).

The Civil War constituted a major rupture for the Southern economy. With the formal abolition of slavery in 1865, wealth from slave-holding evaporated. Land values also declined substantially after the Confederacy’s defeat, reflecting lower levels of agricultural productivity after the war. Overall, these war-related events led to one of the largest compressions of wealth inequality in human history. Compared to 1860, a white household head at the median of the Southern wealth distribution held 38% less wealth in 1870. The wealth of the top 10% wealth-holders fell even by 75% such that the 90:50 ratio dropped from 14:1 in 1860 to 10:1 by 1870.

The magnitude of this large wealth shock with the associated compression of wealth inequality naturally brings up the question whether the planter class, including their offspring, disappeared from the upper rung of the southern society. In his 1951 book, Origins of the New South, C. Vann Woodward argued that the Civil War led to a decay of the southern aristocracy. Since then, this has been the conventional view of postbellum southern history. In our new paper, we challenge this view by showing that despite significant wealth losses, the families of wealthy southern slaveholders regained their economic status within a generation (Ager et al. 2019).

Our new assessment of this long-standing question in American economic history is based on newly digitised complete count records of the US Census. These records contain information that allow us, to follow household heads and their sons over time with standard linking techniques. We construct linked samples of more than 200,000 household heads from 1860 to 1870 and 350,000 sons from 1860 to 1880 and 1900. The main analysis exploits information on household wealth in 1860 and 1870 and proxies for the wealth of sons in 1880 and 1900 (the Census collected no systematic information on individual wealth after 1870).

We evaluate the transmission of the Civil War wealth shock by using two different approaches. The first approach compares white Southern households whose surnames, on average, were associated with high/low slaveholdings in the same percentile of the national wealth distribution in 1860. For the second approach, we link as many households as possible to the slave schedule of the 1860 Census and compare those known slaveholders that are in the same percentile of the 1860 wealth distribution but invested more/less of their wealth in slaves. To account for localised differences in agriculture, we control in both cases for area fixed effects (county or state).

Our main finding for household heads in 1870 is illustrated in Figure 1 (note the main effects of 1860 wealth percentiles are not reported). Households with likely slaveholder surnames held identical wealth as non-slaveholders in 1870 if they were located between the 40th and 70th percentile of the 1860 wealth distribution. This pattern changes substantially for likely slaveholders that were at the top of the 1860 wealth distribution. For example, at the 90th percentile, households that likely owned slaves in 1860 retained just about 15% less wealth by 1870 than similarly wealthy counterparts. 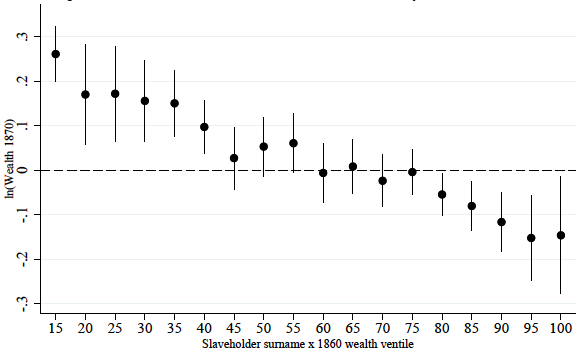 A similar pattern emerges for known slaveholders – those who had relatively more slaves in their portfolio in 1860 experienced substantially higher wealth losses by 1870 than their similarly wealthy counterparts who invested less of their wealth in slaves. 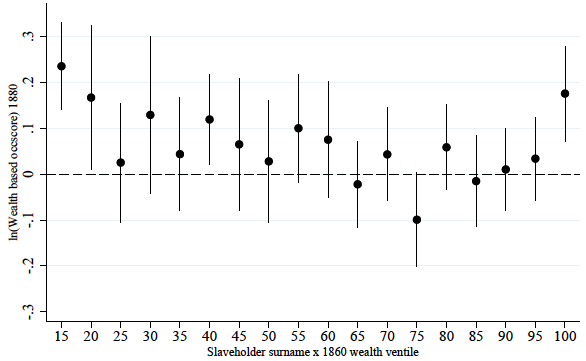 We can even ask what would have happened to the Southern elite if, besides slave wealth, they also lost their land. While land distribution did not occur at a large scale after the Civil War, we can assess such a scenario by looking at two specific regions where landholders were either temporarily expropriated (the areas affected by Special Field Order No.15 – the confiscation of a strip of land along the seaboard of South Carolina, Georgia, and Florida) or their land and capital being destroyed (the areas affected by Sherman’s March to the Sea – a military campaign that followed a policy of ‘scorched earth’ in parts of Georgia and the Carolinas). Despite the fact that, in both cases, wealthy household heads in these areas experienced substantial wealth losses relative to similarly-wealthy households in adjacent counties (up to 40%), their sons completely caught up with sons of comparable wealthy families in those neighbouring counties.

What can explain the recovery of the Southern aristocracy despite such substantial wealth losses? We provide evidence that existing social networks were the most likely explanation for the resilience of the Southern elite. These networks facilitated employment opportunities and access to credit. We discover that slaveholder sons married spouses from households that were wealthy before the Civil War, which provided them access to the networks of their affluent fathers-in law. Sons also shifted into white-collar work, a process which the social history literature attributes to family connections.

Overall, our results indicate that the wealth shock associated with the Civil War and the abolition of slavery was not transmitted to the next generation. While these findings are based on comparing households within the South, one well known fact is that the North outperformed the Southern economy for more than a century after the Civil War. When comparing wealthy Southern households with Northerners that were at the same percentile of the national wealth distribution in 1860, we find that Southern households experienced substantial wealth losses. While similarly wealthy Northerners held at least 50% more wealth in 1870, a substantial part of this wealth loss was also transmitted to future generations and disadvantaged the sons of the Southern elite relative to their Northern counterparts (this gap started to disappear by 1900).

The persistence of the total Southern wealth loss indicates that it was not the transfer of slave wealth from slaveholders to former slaves per se that mattered but differential productivity shocks in agriculture and manufacturing that substantiated the North-South gap after the Civil War. Our findings on elite resilience after the war is consistent with Acemoglu and Johnson’s (2008) theory on elite persistence – the elite used their de facto power (in our case their social connections) to overcome the loss in de jure power (in our case the abolition of slavery and black enfranchisement). The rise of sharecropping arrangements and the implementation of anti-enticement laws to restrict the mobility of the agricultural labour force can be regarded as responses of the planter class to Reconstruction efforts after the war. In that way, they managed to preserve the ‘old’ Southern economic structure and retain their relative economic position within the South.

Our findings of elite persistence questions the traditional view of a decaying southern elite after the Civil War. When the abolition of slavery in 1865 and other reconstruction policies threatened their economic status, they invested in their social networks which helped them to recoup their losses fairly quickly. The recovery of the southern elite also indicates that while occupational mobility in the US was rather exceptional at that time this was definitely not the case in the postbellum South.

Editors’ note: This column first appeared on the Pro-Market blog. Reproduced with permission.