Latest News
Home /The Poor Who Are Not With Us

America has a bad case of poverty denialism.

And no wonder. Being poor is stigmatized. In neo-Calvanist America, if you aren’t doing well, it must be the result of bad choices (like choosing the wrong parents) or not working hard enough. So many people in dire straits often feel compelled to underplay how bad things are for the sake of their dignity.

But as the gap between rich and poor has turned into a yawning chasm, the well off are even better able than before to distance themselves from the desperate. One of the ways that seems to happen more and more is to underscore how alien they are compared to urban elites.

Two articles that superficially don’t seem that closely connected but are different facets of this phenomenon are a Medium article (hat tip UserFriendly), Half of Americans Are Effectively Poor Now by Unair Haque and a Wall Street Journal story, The South’s Economy Is Falling Behind (hat tip Scott).

The Medium piece explains that poverty is widespread in America, once you define it correctly, as in not being able to afford necessities:

43% of American households can’t afford a budget that includes housing, food, childcare, healthcare, transportation, and a cellphone. Translation: nearly half of Americans can’t afford the basics of life anymore.

Does that take your breath away too? It should. And yet it might not come as a surprise. You might know it intimately. The statistics say there’s an even chance you’re…living it. What a grim and bizarre reality. Half of people are effectively poor in the world’s richest country…

The folks that did the study above call this new class of people ALICE, for “asset limited, income constrained, employed.” It’s a sharp way to think about American collapse. Let me translate this term, too: the people formerly known as the American middle class.

Let’s take each of those terms one by one. “Asset limited” means that these households don’t have the resources — the hard financial assets — to drawn down on anymore. That tallies with other research which says the majority of Americans now have a negative net worth. In short, “asset limited” is a polite way of saying: indebted for life, with no real way of ever not getting out of the trap. It’s a nice way of saying: broke.

The folks that did the study above call this new class of people ALICE, for “asset limited, income constrained, employed.” It’s a sharp way to think about American collapse. Let me translate this term, too: the people formerly known as the American middle class.

There are two basic kinds of financial poverty, after all. Not having much of an income, and not having any wealth saved up. Americans are poor in both ways now. That’s because their incomes haven’t risen to allow them to save, and their debts keep mounting, which eats up their meagre incomes. Hence (another shocking stat) most Americans now die…in debt…

Is this the 1300s? What do we call a population that live and debt “in debt”? We certainly don’t call them free in any real sense. They’re the modern equivalent of serfs or peasants — who are born owing, and who will die owing, a fictional, unplayable amount.

Representative Katie Porter gave a vivid example of this phenomenon when she grilled Jamie Dimon:

And as some commentators and many readers have pointed out, debt in an effective yoke, particularly in combination with intrusive and intolerant hiring checks, short job tenures and high levels of involuntary part-time employment. If you are desperate, the last thing you’ll do is rock the boat.

But as the gap between rich and poor widens, so does the need to rationalize this state of affairs. The new fad is to demonize rural and small town whites. After all, they didn’t get educated to escape loser communities. And better yet, they are presumed bigots.

Never mind that there is tons of poverty and near poverty in the shiny coastal cities. How many well off professionals think that the barista at Starbucks or busboy is probably barely getting by? The serving classes have to be pleasant, or efficient and unobtrusive, so as not to undermine the enterprise and their job along with it.

And how about tourist-dependent economies, like significant swathes of Maine, a poor rural state? Even in the tony coastal areas, most locals work two or three jobs during the summer to make enough to carry them through the year. The best situated are those who live in communities like Bruswick, where a local school (in this case Bowdoin) supports the town year round. Again, tourist-dependent areas have to put on a good face. The only time I ever heard local business people in tourist areas acknowledge how bad things were, and even the only in passing, was in Spain when unemployment was 27%.

The Wall Street Journal winds up unintentionally providing an example of treating economic distress as the result of “choices,” in this case of an entire region. We’ll note, as many readers did, that the data presented in the Journal account doesn’t even support its headline conclusion: 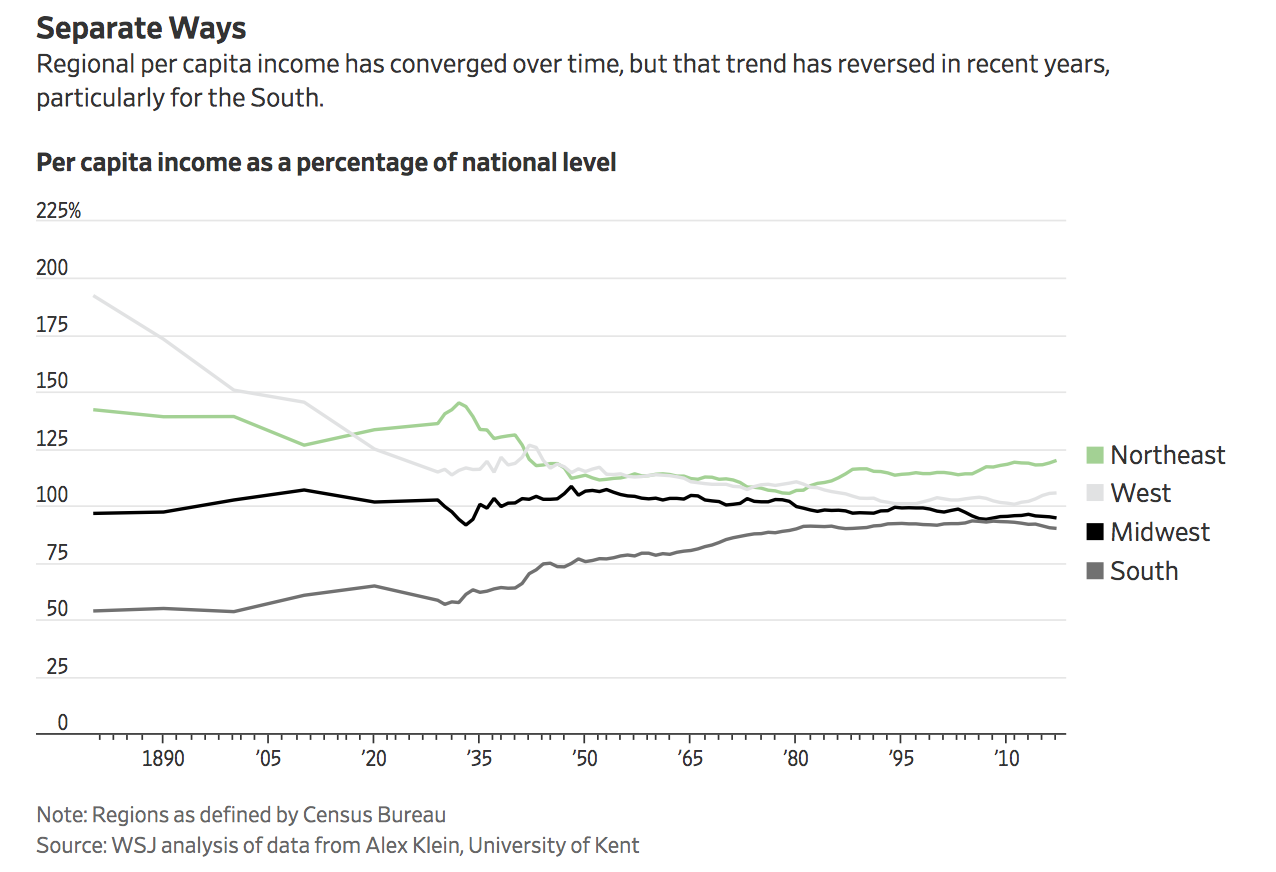 In fairness, the article zooms in on the post-crisis era:

If you go back to 1980, the South has held at roughly the same ratio of per capita income to the US average. You can’t say that about the West or Midwest. And that number isn’t very meaningful until you factor in the cost of living.

In fairness, the article zooms in on the post-crisis era:

The American South spent much of the past century trying to overcome its position as the country’s poorest and least-developed region, with considerable success: By the 2009 recession it had nearly caught up economically with its northern and western neighbors.

That trend has now reversed. Since 2009, the South’s convergence has turned to divergence, as the region recorded the country’s slowest growth in output and wages, the lowest labor-force participation rate and the highest unemployment rate.

The Journal tells a tale of a South that had sought to attract good manufacturing jobs but was losing them, just like the Midwest. It oddly fails to note that some of the old industries of the South, like cotton spinning and furniture-making in North Carolina, went offshore, when in the case of furniture, the economic case was questionable (this from the mouths of industry executives). It uses Natchez, Mississippi as a case study. Mississippi was early to implement what amounted to industrial policy in the 1930s. What was then Armstrong Rubber and Tire opened a plant in Natchez in 1939 which it shuttered in 2001. It depicts a small city trying to reinvent itself, having some success in luring tourists but lacking enough well-educated locals to attract high-end services jobs.

But a big problem with the piece is it uses very strokes to paint a region that included Virginia, Texas, Oklahoma, and Florida. I’ve seen uncomfortably rapid growth in Dallas over a period of a few years as major companies moved headquarters or important functions to Plano and nearby areas, in no small measure because housing prices were cheap. The article alos blames underinvestment in education on segregation, when cuts in Federal funding to state public universities also played a role. The comments on the piece were critical, and some were openly defensive, including ones that took the piece as a dig at Trump.

Small towns and rural America have been decline for a generation regardless of region.

George Jones
This article shows why economists and statistics are both useless. Dead factories are all around the US, not just the South. Just take the Acela from DC to Boston you will see the dilapidated shells of former industries. And of course the answer is to invest more in education – put forth by university professors, shocker. Manufacturing went to China and Mexico because our politicians encouraged it through fiscal and tax policies, not to mention corruption.

TK Wallace
I just love articles on the “poor south” – yet, living down here, with children in states all over the area, I see a different picture. I see demographics at work, especially in the cities, where the preponderance of people with no desire to work drag the numbers – and the educational performance – down. And it is NOT because they are not given the opportunity.

Meanwhile, all these “rich people” up north ignore that little thing called “cost of living” – why do you think they all leave when they retire – it is way more than the weather.

Average BLS wage by state divided by cost of living:

Note that CA and OR are below ALL the states listed, NY and CT just average, the two Washingtons leading the way.

Even though the article gave an oversimplified picture of the South by focusing on small town distress and not acknowledging that large and even many small cities are doing well, it’s hard to miss the subtext of “they need to pull themselves up by their bootstraps.” Yet one of the reasons poorer states became less poor was the leveling effect of net transfers from the Federal government. The reduction in Federal spending, particularly social spending, is curiously absent from this picture.

Yet again, rural poverty and distress is somehow not part of the brand image of the blue states, which are really states dominated by blue cities. California’s Central Valley has plenty of poverty. Upstate New York has been sliding into distress since companies like Kodak foundered. Western Massachusetts is also struggling and has an opioid crisis of its own. But somehow we here much less about the poor in our midst in the big cities (the homeless are safe because they are an obvious “other” to most people, as well as a NIMBY issue) and in the wilder parts of blue states.

It’s disturbing after seeing small town America put on a pedestal (think of 1960s television) to now see a backlash, as if the entire country could consist entirely of cities full of professionals. At our Birmingham meetup, a Democratic party operative said that the state party organizations in the Midwest and South were getting sick of the attitude and worst the policies that were based on the idea that those parts of the country existed to be sucked dry by the coastal cities. He intimated that the anger was reaching the boiling point. America is more divided and diverse than most people recognize, and Team Dem may find out it isn’t such a good idea to try to play that up.