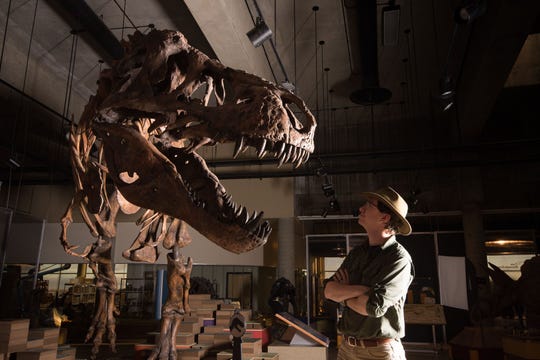 The massive predator, nicknamed “Scotty,” was about 42 feet long and likely weighed more than 9.7 tons, according to the study published last week in the peer-reviewed journal The Anatomical Record. Not only is the massive specimen the biggest T. rex ever found, it’s also larger than all other carnivorous dinosaurs.

“This is the rex of rexes,” said study author W. Scott Persons in a news release. “There is considerable size variability among Tyrannosaurus. Some individuals were lankier than others and some were more robust. Scotty exemplifies the robust.”

The fossil was nicknamed after a celebratory bottle of scotch opened the night it was discovered in Canada. Although the bones were found in 1991, it took more than a decade to excavate them from the surrounding hard sandstone.

Under the sea: A ‘sea monster’ from 500 million years ago: Scientists say this creature had 18 tentacles

Scotty died at around 28 years old in Saskatchewan about 66 million years ago, the study says. Most T. rexes grew fast and died young, making Scotty the oldest of its kind.

“You can get an idea of how old a dinosaur is by cutting into its bones and studying its growth patterns. Scotty is all old growth,” Persons said. “By Tyrannosaurus standards, it had an unusually long life. And it was a violent one.”

Scotty’s bones bear the scars of numerous injuries including a broken rib, an infected jaw and a bite that appears to be from another T. rex on its tail.

The skeleton, which is about 65 percent complete, is scheduled to go on display in May at the Royal Saskatchewan Museum.