Latest News
Home /The Two-State Solution Is Dead. Bloodbath Next?

There are two possible futures for Israel and Palestine: one close to the vision of Isaiah — “nation shall not lift up sword against nation, neither shall they learn war any more” — and one reminiscent of the prophecy of the Sibyl of Virgil’s Aeneid: “wars, horrendous wars,” the Jordan “foaming with tides of blood.” It’s a simple choice. Let’s choose peace.
—Presidential candidate Mike Gravel (source)

The part of the Middle East formerly known as Palestine is lost as a two-state region. The Israelis are “systematically” driving toward a single regional state: the State of Israel. Below is a map showing Israel proper, the West Bank region, Palestinian population centers and the growing incursion of Israeli settlements which are “eating” the West Bank. 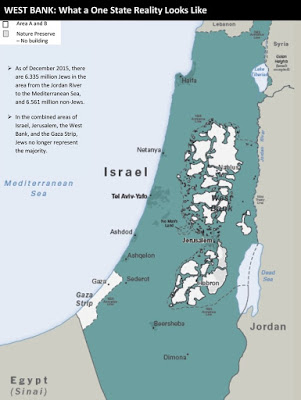 “A State Department map shows Palestinian population centers in the West Bank. Obama was surprised to see how ‘systematic’ the Israelis had been at cutting them off from one another.” (source, click to enlarge)

The outcome of this long process of territorial integration, barring any implementation of an alternative to the “two-state solution,” will be as Mike Gravel says, “horrendous war, the Jordan foaming with blood.” The monomaniacal drive by Israel’s leaders to recover the western part of their Iron Age kingdom has now made peace impossible, sansintervention.

If the two-state idea is dead, what alternatives are left? Just one. Below I list the main points of presidential candidate Mike Gravel’s proposal, offered as the only non-military, non-ethnic-cleansing way forward. Is this solution “practical”? No, it’s not, in the sense that the current leaders of the U.S., Israel and Palestine will not accept it.

But yes, it is practical, in the sense that a bloodbath in the region — and it will come to that — a bloodbath that will wash over all of the Middle East, is the only other alternative. If a war of this magnitude is itself “impractical” in the extreme, Gravel’s solution is imminently practical. I, like Gravel, see this as the only way out.

Here are Gravel’s main points, as offered in a recent Mondoweiss piece:

• Move toward creating a secular, democratic binational state — “Most American diplomats will, in their more candid hours, admit that the two-state idea is long dead. Prudence dictates that America acknowledge that on the world stage and begin the search for other solutions. The most obvious and humane path forward is the creation of a secular, democratic, binational state with equal rights for all. That is the model the U.S. government, with its partners in the region, should work toward and publicly highlight as the ideal outcome.”

Gravel recognizes that the above proposal would disappoint everyonein the region. Yet it’s the only peaceful way forward: “Both visions serve an abstract nationalism rather than the actual needs of Israelis and Palestinians living in the area, and a state along the lines of the idealized United States model, one with no prized ethnicity or religious character, is the solution all those seeking a humanitarian alternative should support. There would be no need for the byzantine arrangements (land swaps, dual city ownership, etc.) upon which most attempts to resolve the conflict have hinged: it would simply be the decision—an admittedly difficult one—to live together, Muslim, Jew, and Christian, in a peaceful, democratic, egalitarian society.”

• Force AIPAC and similar pro-Israel groups to register as foreign lobbies — “The first step should be mandating that AIPAC register as a foreign lobby under the Foreign Agents Registration Act (FARA). AIPAC manages to skirt American laws about foreign lobbying by claiming that it represents Americans who happen to support Israel. But the shockingly close ties between the governing Likud Party and AIPAC give a lie to this legal fiction; AIPAC will always stand closer to Israeli interests than American ones. Such an arrangement would prevent AIPAC from influencing American elections, and would require it to report all of its contacts with Congress, along with details of its spending, to the Department of Justice.”

The point about preventing influence in American elections is important — the present arrangement skirts very close to the line marked by our present panic over “foreign interference in our democracy,” if it doesn’t cross well over it. Without Israeli influence in the U.S. electoral process, a wider world of foreign policy and peace-making options is open to us.

Yes, I know this proposal is anathema in the current environment — witness the immediate and bipartisan vilification of Rep. Ilhan Omar — but Gravel merely says out loud what everyone in D.C. knows, but won’t repeat with a microphone nearby. Nevertheless, we in the “reality-based community” should acknowledge this fact.

• End military support for Israel — “Next, the U.S. should end military aid to Israel, citing the Israeli military’s complicity in crimes against the Palestinian people. It should call for a gradual demilitarization of Israel and Palestine, and should be clear with the Israeli government that the days of Israel-right-or-wrong are over. Future outrages by either side will receive an even-handed response without bias. Accordingly, it should demand that Israel bring itself into compliance with international law and end the harassment of dissidents…”

This proposal, actually two proposals in one, is highly controversial to say the least. Cries of “but Israel needs to be able to defend itself” will be loud enough to cause deafness. In response, I would add to Gravel’s call my own proposal that we end all military support in the region. Note that ending U.S. military aid does not mean immediate disarmament for any of these nations; far from it. Israel can do quite nicely without U.S. dollars swelling their military coffers — and besides, as the only nuclear-tipped army in the region, it still has the deciding advantage.

The region’s militarization, in fact, underscores the importance of the second part of his proposal, a “gradual demilitarization of Israel and Palestine.” Recall again the aforementioned atrocities and “crimes against the Palestinian people.” Those do have to stop or be made to stop. If they don’t, the region is on the road to ethnic cleansing, and that won’t end well for anyone, including the U.S. and Europe.

It’s a simple choice: demilitarize or keep on the current path. There’s no middle ground. Once the main goal is shifted to a peaceful secular state, the need for demilitarization between Israelis and Palestinians is inescapable.

• Finally, end U.S. attempts to stifle BDS, the Boycott, Divestment, and Sanctions movement — “the U.S. should refuse to take unconstitutional steps to stifle BDS. Whatever one’s personal thoughts on BDS, an individual or group’s decision not to associate with another group or country is a legitimate exercise of the freedoms of speech and association guaranteed by the Constitution, and using the power of the government to influence those decisions is wrong. Senators Amy Klobuchar and Cory Booker should be ashamed of themselves for supporting federal laws to restrict BDS. (It is perhaps no coincidence that Booker and the president of AIPAC ‘text message back and forth like teenagers,’ by Booker’s own admission.)”

If peace in the Palestinian region is the goal, and if you’re clear-headed about what it will take to get there, these are the most practical steps, and in fact the only ones, no matter how objectionable they will be to everyone involved in the conflict.

First, the goal must recognized realities on the ground. If a two-state solution is impossible, the only alternatives are an increasingly cleansed Greater Israel, with intifada after growing intifada revenging within its borders, or a peaceful secular state. One cannot have a religion-dominated Israel as the only state in the region and still have peace. One may as well want a bird that can fly to the moon.

Next, if the second alternative, a peaceful secular state, is to be achieved with U.S. leadership, the U.S. political process much be cleared of the protected intervention of the Israel lobby. If not, its paid politicians will win almost every battle, neutering every attempt at make peace, until peace itself is a dream of the past and war is the fact on the ground, the “foaming tide of blood” Gravel seeks to avoid.

Neither of the alternatives, a one-state region dominated by religion and cleansing, or a one-state region of diversity and tolerance, will be achieved without great pain. But I were the one choosing between them, a road that leads to a foaming tide of blood would be last on the list, if it even made the list at all.