Fun-loving readers, I noted Hopelb’s comment on Victory Gardens (June 9 on a Midwest flooding post)[1], and thought I’d put together a potted history of Victory Gardens with some remarks on climate change, with one or two World Wars I and II posters for color, but then I got sidetracked on the amazing posters! So I changed direction, and now I’m going to present a few of these amazing deliverables instead, bracketed with a brief contextualization from what seems to the only scholarly book on Victory Gardens in the United States (Rose Hayden-Smith, Sowing the Seeds of Victory: American Gardening Programs of World War I, and a conclusion about issues of scale for Victory Gardens in our own era. From Hayden-Smith: 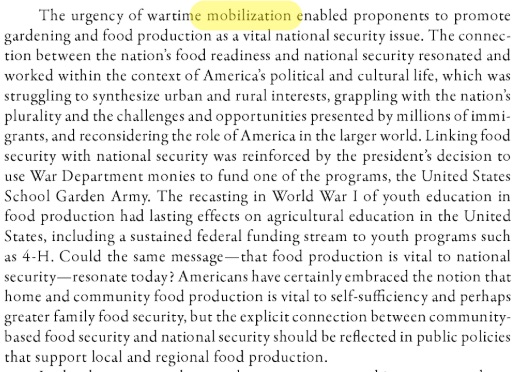 Note the key word: “mobilize.” This was also a key word in AOC’s Green New Deal proposal (see here and here) which sadly the Democrat leadership has managed to deep-six. More from Hayden-Smith: 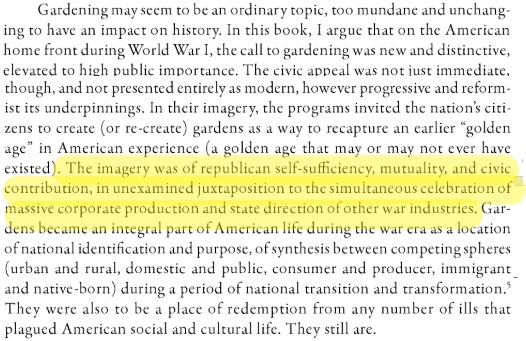 The imagery — OK, the propaganda — I am about to present is so fecund that it spills over the generous bounds set by Hayden-Smith (“Potato Pete,” for example, isn’t about “republican self-sufficiency, mutuality” or “civic contribution”). But when we recall that “Victory Garden” is so potent a trope that it survived all the way through to the 70s with “Crockett’s Victory Garden (the book; the television series) and up to today (“Join the Climate Victory Garden Campaign!“) we can see that wartime propaganda starting over a century ago has been very, very effective, not just as propaganda but in shaping the terms of culture for generations. Let me now wander through the posters, taking forking paths and tweaking tendrils. 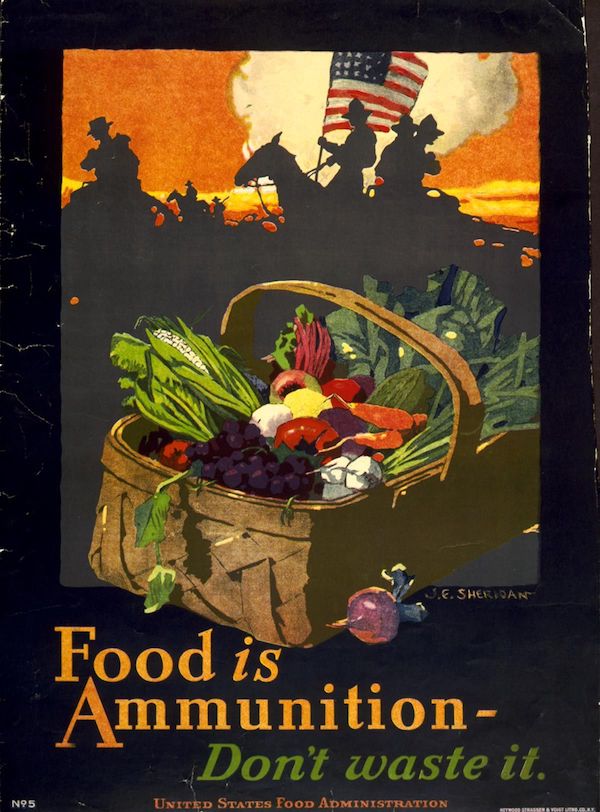 “Food is ammunition.” Did I mention militarism? Of course, we have plenty of militarism today, but I’m not sure — perhaps subject matter experts are already working on this — how to repurpose militarism into a thirst for gardening (though the Jackpot will perhaps serve as a lash and a spur)[2]. What does victory look like in a “war” against climate change? Then again, progandanda for the “War on Terror” has been very successful, and nobody knows what victory looks like for that war, either. 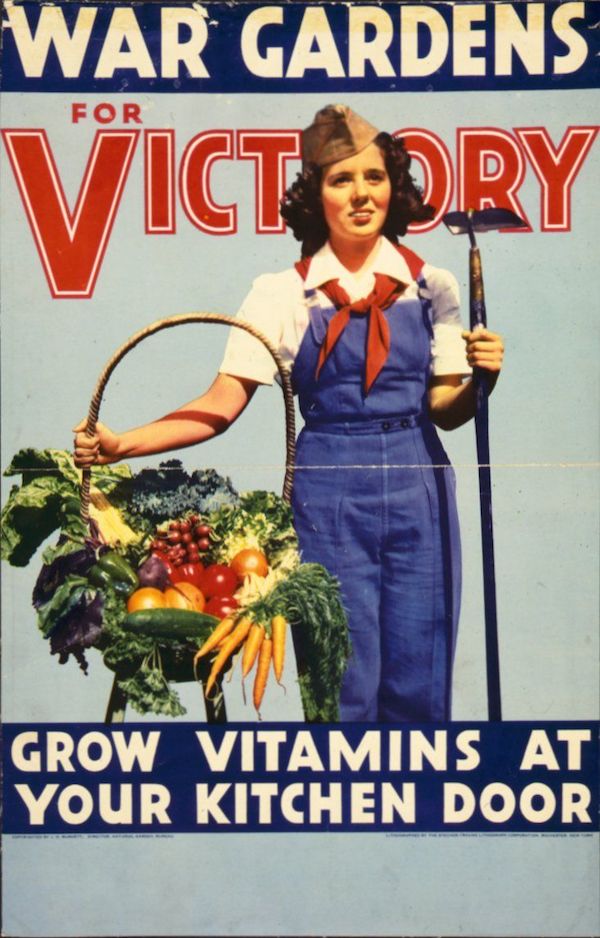 Many of the Victory Garden posters, like this one, are heavily gendered (the real men being at the Front, no doubt. But what’s with the Komsomol-style red neckerchief?) And what’s with the vitamins? If you have grow good vegetables — rather, if society grew and distributed good vegetables — you wouldn’t need corporate-produced and -mass-marketed vitamins, surely? (Yes, yes, vitamins supplement, but the message that vegetables are vitamins seems odd.) My first thought is, Wow! That looks like a splendid garden! No plant blindness here! (Nor row covers nor structures for beans or cucumbers to climb on, either.[3]) But notice the small print at the bottom: “Ask the U.S. Department of Agriculture Washington D.C. for a FREE Bulletin on Gardening–It’s food for thought!. It’s FREE! We have nothing like this level of mobilization today.[4] The Agricultural Extensions are the closest analogue, and not very close. 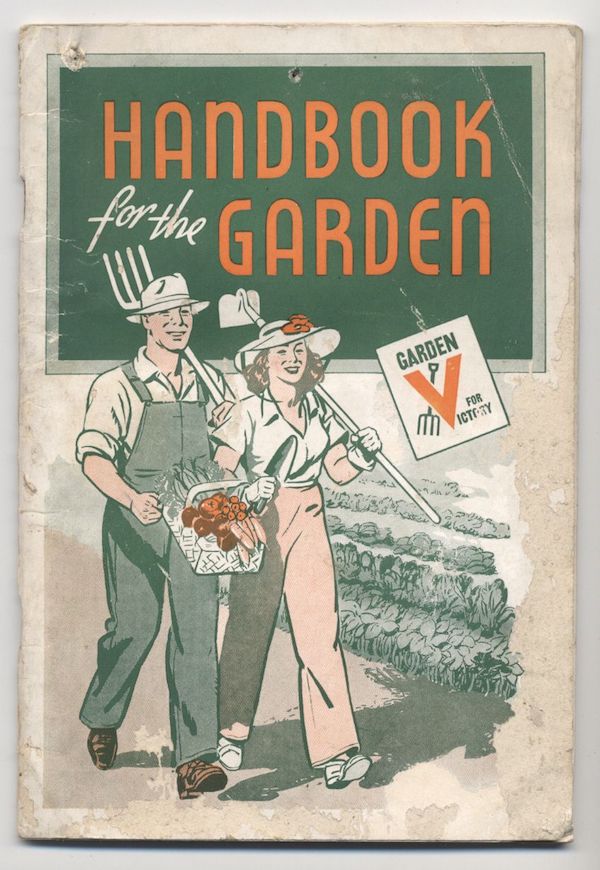 The cover of one of the many collaterals produced for Victory Gardens by — follow me closely, here — the government. Nothing against a dense network of NGOs and community gardens, but they don’t scale. Leaving the gendered militarism — and covert reference to Millet’s (revolutionary?) The Sower? — aside, note again the small print at the bottom: “WRITE TO THE NATIONAL WAR GARDEN COMMISSION — WASHINGTON, D.C. for free books on gardening, canning, and drying.” Here again propaganda shades over into knowledge: The complete, yearly cycle of a really dedicated — or desperate, Jackpot-ready — gardener includes preservation, here canning or drying, though today we would add pickling. Naturally, if we were mobilizing today, the seeds would be branded Monsanto; seeds were still a public good, not intellectual property, in the days of Victory Garden propaganda. 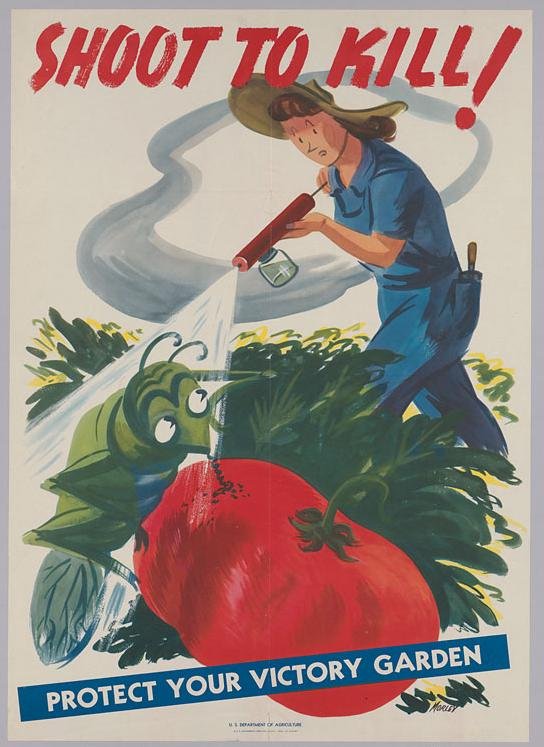 And speaking of Monsanto, let’s spray our plants with poison and pollute the water supply, to boot![5] 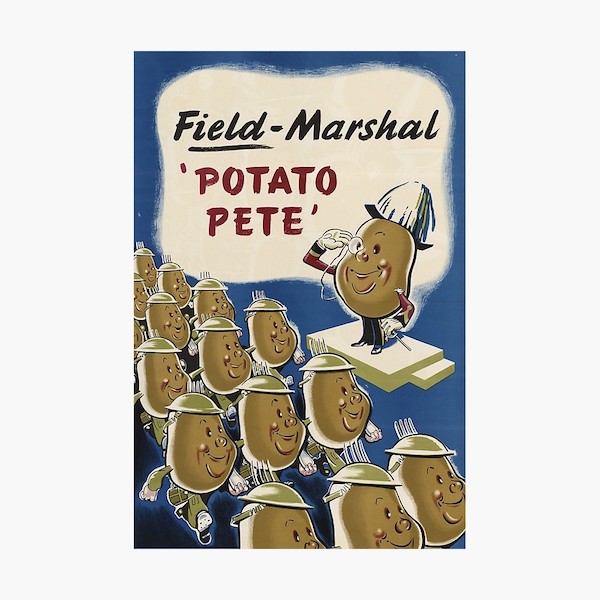 Michael Pollan would see “Potato Pete” as an example of plants communicating, which they do (just not with vocal cords and without a nervous system). The Bearded One, however, would see “Potato Pete” as an example of commodity fetishism, an enormous category error whereby “the relation of the producers to the sum total of their own labour is presented to them as a social relation of objects which exists outside them… It is a particular social relation between men [sic] themselves which in their eyes assumes a phantasmagorical form of a relation between things” (in this case a social relation between a potato personified as a Field Marshall, and other potatoes personified as soldiers). In presenting “Doctor Carrot” I make the same point as above, but I’d add that to this day I believe, because my parents taught me, that carrots are good for eyesight, and I’d speculate that their belief comes from wartime Victory Garden propaganda, to which they are both subject.

That is the end of my random walk through Victory Garden posters. Concluding–

It’s very clear that wartime propaganda can be staggeringly effective, and over generations, too. What is the relevance to the present day? (Beside the idea that gardening is a good thing in and of itself.)

First, we might ask ourselves what we can do in the case of a massive food failure by Big Ag (say a catastrophic failure of the Mississippi’s Old River Control Structure). Could modern day Climate Victory Gardens — possibly after a very bad year — pick up the slack? The history of Victory Gardens gives us reason to think so. The state of Oregon has a fine round-up:

Authorities also provided citizens with selfish reasons to have a Victory Garden. Home gardeners wouldn’t have to worry about crop failures in other parts of the country or transportation “bottlenecks” limiting supply. They would save money too since “even a small garden, if well planned and tended, will yield $25 to $50 worth of vegetables.” People with Victory Gardens would be healthier since “there’s nothing like exercise and better meals to improve your health, which is doubly important in wartime.” And, officials asserted, home grown food is tastier: “It’s not only because you raised it yourself, with sweat and care. Vegetables and fruits do have a better flavor when they are really fresh, as they are when they come right from the garden.” And for those suffering from wartime anxiety, “there isn’t a better hobby for lots of people. It makes you feel good. It relaxes your nerves. It’s a family enterprise that brings together father, mother, son and daughter.” Even the community benefits of gardening could make the individual feel better since gardens “promote neighborliness, sociability, cooperation.” With home gardeners providing 40% of the country’s fresh vegetables by 1944, the individual could feel patriotic about the contribution.Footnote 2

(Note all the good reasons for gardening, like “[i]t relaxes your nerves.” Sometimes the best propaganda is the simple truth!) That doesn’t prove that Victory Gardens can feed the country, of course, but it does prove that they scale. (Microgardens in Russia produce 40% of the country’s agricultural output.)

One question we might ask ourselves is whether the United States government, today, has the capacity to mobilize on the scale of World Wars I and II, or whether the last decades of neoliberalism’s assaults have hollowed it out beyond repair. Mobilization, again, is an explicit goal of AOC’s version of the Green New Deal, and the reaction of both parties’ (current) leadership to her resolution suggests the answer to that question might well be “no.”

A second question we might ask is the extent to which neoliberal infestations would cripple any mobilization achieved. Not only would corporations seek to use Climate Victory Gardens as marketing vehicles for their own — biosphere-malignant — products, they would surely seek to optimize garden distribution to maximize profit, as opposed to yield for those who most need it (much as Farmer’s Markets, sadly, rarely solve the problem of food deserts, being far too NPR totebag-adjacent).

All that said, we still must conclude that Climate Victory Gardens offer enormous potential, at the very least as a hedging strategy against food failure. We should be encouraging this form of public policy, seeking to eradicate neoliberal infestations where found.

[1] Google, as we might expect these days, can’t find it; not being able to find text I know exists — often, because I wrote it — is a regular feature of my Life With Google™ these days. Must be the optimization.

[2] Oddly, the Earth One protagonists in Gibson’s Peripheral seem to subsist mainly on junk food. This is thematically appropriate, but if you look at the book as an exercise in world-building, you’d think that there’d be every incentive for gardens.

[3] I wish I knew of a history of garden apparatus. For example, when were “row covers” innovated, and why? Did we always need them, and just could not use them because we had no suitable fabric? Or did we once not need them, and then — perhaps beause insects adapted — we did? I’m guessing this sort of history would be useful in the same way that tracking tree rings is useful.

[4] The (controversial) FAQ for AOC’s GND resolution includes this: “Work with farmers and ranchers to create a sustainable, pollution and greenhouse gas free, food system that ensures universal access to healthy food and expands independent family farmin.” What about the horticulture and gardeners? Especially given the enormously successful branding of Victory Gardens?

[5] The first legislation regulating pesticides was introduced in 1910, so apparently harms were known well before this poster was created.