Latest News
Home /Which NCAA tournament games will be best on Sunday? We ranked them so you know when to watch March Madness
CLOSE

SportsPulse: Saturday was all chalk for the most part with Ja Morant and Murray State bowing out of the tournament. Trysta Krick recaps the action and looks ahead to Sunday’s slate.
USA TODAY

Saturday’s second round games delivered some memorable moments, but was low in the bracket busting department. Sunday figures to be different, with five double-digit seeded teams in action, including Cinderellas Liberty and UC Irvine as they look to extend their March magic. That, and some guy by the name of Zion Williamson is lacing it up Sunday, too.

Here’s a look at the game slate reorganized for your viewing pleasure, ranked based on watchability.

1. No. 1 Duke vs. No. 9 UCF (5: 15 p.m. ET, CBS): Two otherworldly humans will be on the court at the same time in Duke’s Zion Williamson (6-7, 285 pounds) and UCF’s Tacko Fall (7-6, 310 pounds). The Blue Devils get equal doses of production (51 combined points vs. North Dakota State) and energy (highlight-reel, momentum-shifting dunks) from Williamson and R.J. Barrett, so containing Duke’s player of the year candidates will be a top priority for UCF. Coach Johnny Dawkins, a Mike Krzyzewski disciple, will look to keep this Duke team out of the paint and make them shoot from outside. That’s easier said than done, but at least he has a 7-footer to protect the rim. Or at least try to.

LET IT OUT: Maryland coach’s tearful speech after heartbreaking loss 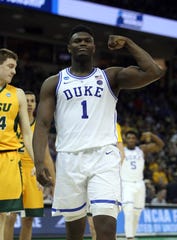 All eyes will be on Zion Williamson on Sunday. Can Duke’s high-flying star put UCF’s Tacko Fall on a poster? (Photo: Jeff Blake, USA TODAY Sports)

2. No. 3 Texas Tech vs. No. 6 Buffalo (6:10 p.m., TNT): Both teams hammered their first-round opponents. Now they square off with each looking like a team that is very capable of making a Final Four run. Buffalo has been overlooked all season while rolling through the MAC, and Texas Tech’s Big 12 regular-season title was a product of Jarrett Culver’s breakout year. The All-American guard had 29 points in the Red Raiders’ win over Northern Kentucky and will need another big night to advance past this gritty mid-major.

3. No. 4 Virginia Tech vs. No. 12 Liberty (7:10 p.m., TBS): The Hokies weren’t challenged by first-round opponent Saint Louis, and now they get another mid-major in the second round. But the Flames are riding high coming off a program-defining victory over a much taller and more athletic Mississippi State team. Liberty’s two first-round heroes — Caleb Homesley (30 points) and Lovell Cabbil Jr. (dagger three-pointers) — will both have to be on their “A” game once again to knock off a vastly underrated No. 4 seed. Virginia Tech got a big boost by the return of point guard Justin Robinson in their first-round blowout. The Hokies had been without their floor general the past 12 games. 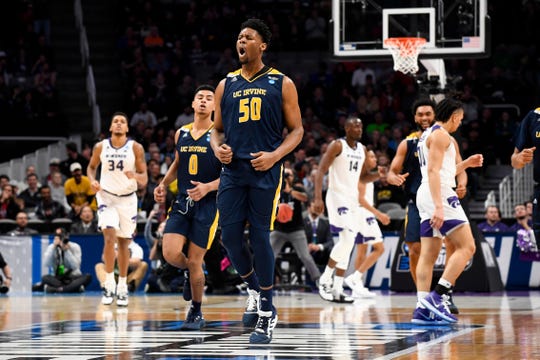 4. No. 12 Oregon vs. No. 13 UC Irvine (9:40 p.m. ET, TBS): Nothing like a double-digit seeded duel in the second round. Both the Ducks and Anteaters pulled off first-round upsets, although it’s hard to consider Oregon’s win over Wisconsin that surprising considering the Ducks have been playing so well of late, including winning the Pac-12 tournament. UC Irvine’s win over Kansas State made them the tourney’s first true Cinderella, and now they look to do more to keep the storybook run going. The Anteaters’ star is Max Hazzard, a 5-10 guard who’s a big-time shot-maker with 19 points in the first-round victory. But it’s going to take a collaborative offensive attack against an Oregon defense that’s fueled their nine-game winning streak and has the Ducks as one of the tournament’s most dangerous teams. Oregon is limiting opponents to 34 percent shooting in that span, and it’s a byproduct of Kenny Wooten’s athleticism and Payton Pritchard’s ball-hawking.

5. No. 3 Houston vs. No. 11 Ohio State (8:40 p.m. ET, TNT): There’s a reason the Cougars have only lost three games this season, and that was on full display in their rout of Georgia State in the first round. In that one, Corey Davis Jr. drilled seven 3-pointers — including six consecutive at one point. Coach Kelvin Sampson’s guard-oriented team will face a team that relies heavily on its big man in Ohio State; the Buckeyes were able to upset Iowa State in the first round by riding Kaleb Wesson, who had 21 points and 12 rebounds. Wesson missed three games late in the season and OSU fell to the NCAA tournament bubble. Containing the big man will be priority No. 1 for Houston.

6. No. 2 Tennessee vs. No. 10 Iowa (12:10 p.m. ET, CBS): The Volunteers looked a little shaky against No. 15 seed Colgate in the first round and their ugly showing against Auburn in the SEC tournament hasn’t provided evidence of the Final Four threat it aims to be. But at the end of the day, Tennessee has two players in Grant Williams and Admiral Schofield who can make bad games winnable. The winning equation for Iowa is rather simple: Shoot well, as it did against a smothering Cincinnati defense. The Hawkeyes’ guards can get hot, but they need consistency out of forwards Tyler Cook and Luka Garza — Iowa’s leading scorers — to make their offensive machine go.

Brackets: Keep up with March Madness

Takeaways: What we learned from Saturday’s second round NCAA tournament games

7. No. 1 Virginia vs. No. 9 Oklahoma (7:45 p.m. ET, truTV): The Cavaliers got the nerves out after trailing at halftime against a No. 16 seed. In an eventual drubbing of Gardner-Webb, this Virginia team showed why it’s much better than last year’s team that was upset by UMBC. It starts with De’Andre Hunter’s instant offense and is punctuated by the fact that UVA is statistically the best 3-point shooting team still dancing thanks to All-American Kyle Guy’s 46 percent clip. Speaking of hot shooting, Oklahoma put on a clinic in its 23-point throttling of Ole Miss. The Sooners had four players score in double figures off 58 percent shooting in that game. They’ll need all that and more to take down the No. 1-seeded Cavaliers.

8. No. 1 North Carolina vs. No. 9 Washington (2:40 p.m.ET, CBS): The Tar Heels looked sluggish in the first half of their first-round win over Iona, whereas the Huskies came out swinging to knock out Utah State. Washington’s momentum after a nice first-round victory might be vital against a heavily-favored UNC team. Freshman guard Coby White continues to excel, while forward Cam Johnson consistently delivers to make this team a tough draw.